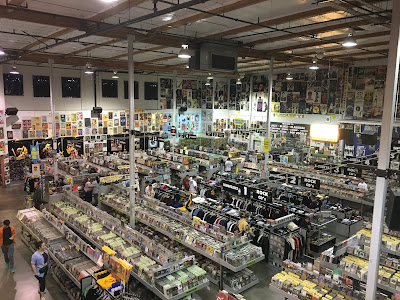 Amoeba Music is moving, now that the City Council has approved a new 26-story tower on the site. But no one knows where Amoeba is moving to — and I can't imagine, wherever it ends up, that the new location will be nearly as large or exciting as its current digs.

Amoeba, of course, is the last of the great monster-sized music shops. There are still plenty of other record stores in Los Angeles, but none of them are very large. Stores like Rockaway Records have survived by downsizing their space. Large retailers like Tower Records and Virgin Megastore are long gone, and even decent-sized stores like Aron's Records have disappeared. 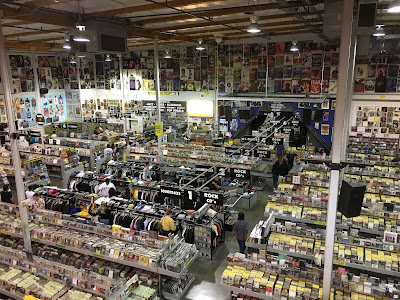 Writes the L.A. Times: "The retailer’s Hollywood location, which opened to great fanfare in 2001, has been in a kind of holding pattern since news of the possible development came to light a few years ago. The store sold the building to developer GPI Cos. in 2015 for $34 million." 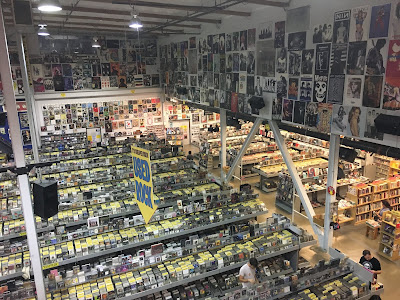 The Times also notes that Amoeba has repeatedly promised to reveal its plans, yet hasn't yet — which gives me cause for concern. Adds the paper:

“Amoeba has every intention of remaining in L.A.,” Amoeba’s Jim Henderson told The Times in 2017, citing the store’s statement on Facebook as the most complete update on its future at 6400 Sunset Blvd. “Rest assured, we are NOT closing, but we are now in a position where we may have to change locations in the coming years.”

On Tuesday morning, Henderson seemed unconcerned with the City Council’s vote. Amoeba’s move is a foregone conclusion, he said. The store has a lease that will carry it in its current location “for about another year,” he said, with a few brief extension opportunities.

“But I can also tell you that if we find something that’s a fit, then obviously we won’t be taking those extensions and GPI can get on with their business and we can get on with ours,” Henderson added.

The council’s vote was the final hurdle facing the development, which will replace the two-story Amoeba building with a mixed-use tower slated to contain up to 200 residential units. The ground floor will provide 7,000 square feet of commercial space, but there are no indications that Amoeba will remain at the address.

Save Amoeba!
Posted by Michael Schneider at 4:22 PM