Vidiots Moves to Eagle Rock, As Another Local Dark Theater Is Revived 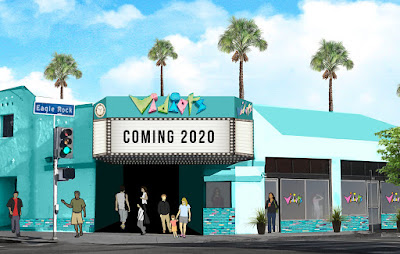 Just months after the Bob Baker Marionette Theater moved to Highland Park and took over the former York Theatre (which had more recently served as a church), another area dark theater-turned-church is also getting a revival.

Eagle Rock's Eagle Theatre, most recently home to a series of churches, will soon return to its original function as a theater — thanks to a revival of famed video store Vidiots.

Now a film nonprofit, Vidiots will relaunch in Fall of 2020 "as an expanded entertainment, social, and community space" at its new home in Eagle Rock. Vidiots closed its Santa Monica location in 2017 after decades there, and various attempts to keep it going. Now it's back, and per Vidiots' press release, the new entity will restore "the 90-year-old, 200-seat Eagle Theatre to its original purpose as an independent theater with state-of-the-art sound and projection (35mm and DCP). Vidiots will offer a full program of repertory titles, new independents, hard-to-find gems, beloved classics and community-driven programs. An expansive adjacent storefront will house Vidiots’ 50,000+ DVD, BluRay, and rare VHS collection for rental. The location will also have a multi-purpose, state-of-the-art second screening room for film programs, educational workshops, and special events. Vidiots will collaborate with the best local food and beverage partners to provide an exciting and ever-changing culinary menu." 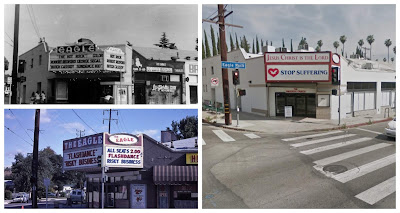 More about the new entity:


Vidiots -- reinventing video store culture for the 21st Century. A one-of-kind hub for film lovers, filmmakers, and everyone curious about cinema, Vidiots is dedicated to inspiring human interaction around film through preserving, growing, and providing access to its diverse DVD, BluRay, and rare VHS collection, showcasing the work of emerging and master artists, and producing unique film events and vital education programs.

A Los Angeles brick-and-mortar film space founded and helmed by women, Vidiots was opened as an alternative video store in 1985 by L.A. natives Patty Polinger and Cathy Tauber. For 32 years Vidiots served its devoted community via the iconic Santa Monica storefront, which shuttered in 2017 in the wake of rising costs. With the generous and unwavering support of Megan Ellison’s Annapurna Pictures (which became a major donor in 2015, along with Vidiots customer Dr. Leonard Lipman), Vidiots was able to store its collection and devise an extensive plan for sustainable relaunch in a new home.

Vidiots’ new home, originally conceived as a vaudeville stage, first opened in May 1929 as The Yosemite Theatre. After a few short days, the Yosemite re-opened as an independent silent movie theater, and a year later it transitioned to sound. In 1940, The Yosemite became The Eagle Theatre. From 1976 to 1979, the theater ran as a Pussycat, part of the infamous adult cinema chain. In 1983, The Eagle once again became a traditional independent cinema, and operated into the 1990s before becoming a series of churches.

With almost-10,000 square feet of entertainment and educational space, Vidiots will operate seven days a week and offer daily screenings and special programs, the full video store with DVD and BluRay rentals, concessions, and a light menu with beer and wine. The main theater (200+ seats, an ample stage, 35mm, DCP, and state-of-the-art sound) will provide flexibility for various screenings and tastemaker events. A second, smaller screening and event space (approximately 50 seats with DCP projection) will be ideal for screenings, workshops, and receptions.

Posted by Michael Schneider at 11:30 AM