A Farewell to KROQ's Bean as He Departs After 30 Years 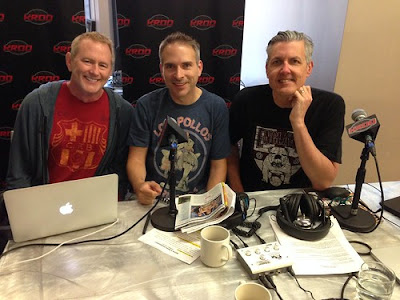 For months, Gene "Bean" Baxter's co-hosts on KROQ's "Kevin and Bean Show" have jokingly quipped "R.I.P. Bean!" to their departing colleague — and listeners have gotten in on the act as well. Bean isn't dying — he's leaving the show after nearly 30 years — and exiting the United States all together, moving with his wife, Donna, to England, where he was born as a military brat.

Being a fellow brat, that's one of several things I have in common with Bean — perhaps most notably, a love of radio. From the time I was a kid, I dreamed of being a radio DJ, and I was obsessed with the Billboard charts (something Bean also geeked out over the years).

Bean not only grew up wanting to be in radio, but he made it happen. And not only did he make it happen, but he wound up co-hosting one of the longest-running and most iconic morning radio shows in Los Angeles history. He and co-host Kevin Ryder have already been inducted in the National Association of Broadcasters Hall of Fame (I happened to be there, and took the video below), and on Friday they'll next be inducted in the Radio Hall of Fame.

Thursday is Bean's final day on KROQ and "The Kevin and Bean Show." And when his fans and colleagues joke "R.I.P. Bean," it's not really a joke. Bean's not dying, but for fans of "The Kevin and Bean Show," to lose a trusted voice and a part of your daily routine say goodbye after 30 years — it's tremendous blow. Like many in Los Angeles, I'm stuck in a car for hours each day, and "The Kevin and Bean Show" is my lifeline to sanity. Thanks to the show's podcast, I can listen to the full 4-hour broadcast, condensed into an hour and a half without music and commercials, every day as a result.

The term "end of an era" has become a bit of a cliché, but the end of Kevin and Bean's partnership is absolutely one. Their morning drive contemporaries — including KLOS' Mark and Brian and KIIS' Rick Dees — are long gone, and radio (not to mention, all of the media landscape) has dramatically changed since "Kevin and Bean" premiered at the start of 1990. 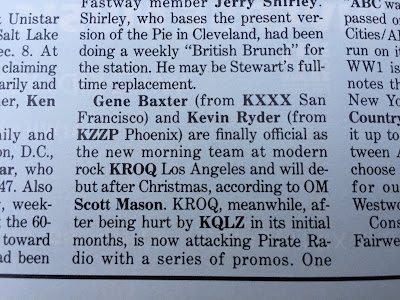 KROQ was already a legendary station when Kevin and Bean began there; as a kid, I read Billboard magazine and poured over the radio coverage so much that I was familiar with major-market stations, particularly on the west coast, like KROQ and KIIS. Funny enough, a 1989 Billboard I still own even includes a "Vox Jox" column announcing the hiring of Kevin and Bean on KROQ.

The first time I actually heard KROQ was in college at Northwestern in Chicago. One of my dormmates was from Southern California, and I asked her to record a cassette of KROQ when she was home for Christmas break. When I moved to Los Angeles in 1996, I knew of the station and Kevin & Bean and began sampling them — while, coincidentally, also listening to a lot of 103.1 "Groove Radio," programmed by former KROQ DJ the Swedish Egil. Mornings on Groove Radio were also handled by a KROQ alum, Jim "Poorman" Trenton, and I would flip back and forth between the two. But soon I was listening to Kevin and Bean full time. I headed to Warehouse Music that fall to buy Kevin & Bean's annual Christmas cassette, which was produced by "Jimmy the Sports Guy," some Brooklyn-sounding dude named Jimmy Kimmel. (I have almost every KROQ Christmas cassette and CD , until they stopped releasing them in the mid-2000s.) 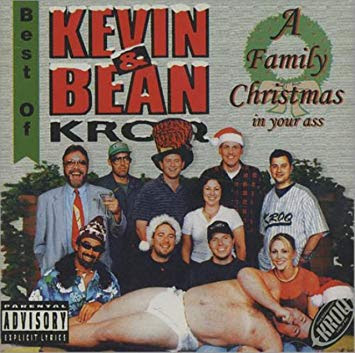 Jimmy left and became a superstar, and Ralph Garman brought an arsenal of voices and improv that turned "Kevin & Bean" into a comedy treasure trove in the 2000s. The supporting team has changed over the years, but the Kevin and Bean formula remains: It's not a "morning zoo" with hyper DJs trying too hard over a dance music bed; it's an irreverent, often satirical and always self-deprecating look at entertainment, the culture, and what it's like to navigate the world around us.

Well-versed in pop culture, history, trivia and minutia, Bean often took lead on interviews, and his ability to hyperfocus on what needs to be asked and answered will be missed on the show. It's a skill that remains surprisingly rare on radio or TV. Listening to his interviews over the years, I think, influenced how I interview various performers and celebrities on my own podcasts.

I had written occasionally about KROQ and Kevin & Bean over the years for Variety and Franklin Avenue. But I really got to know the team thanks to social media. Twitter may be a cesspool, but it does have a useful function when it comes to bringing people together. It was through early Twitter that I conversed with Bean, and started getting invitations to talk TV on the show. Bean would always keep me on my toes, and I knew to brush up on information, as well as bring notes, to make sure I could answer his questions. It was a treat to see them at Comic Con annually, and stop by the studio a few times each year. 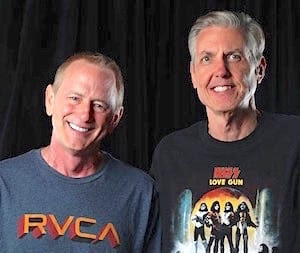 It's impossible to convey how impressive a 30-year run is, especially in radio — where formats, and lineups, change at the drop of a hat. There's no constant in radio, with a few exceptions. "Kevin and Bean" has been one of them. So much has changed since 1990 (I was still a junior in high school, for one thing!). And "Kevin and Bean" has evolved quite a bit since those early days, yet they still are  able to keep up with the times and reflect, to this day, what's happening in pop culture and with their listeners.

As Bean heads to London, I look forward to seeing how the next chapter of his career unfolds; he promises that he's not retiring, and still hopes to find a new radio home overseas. As for "The Kevin and Bean Show," it will maintain that title for a while longer, perhaps until the end of the year. But beyond cosmetic changes, like a new title, not too much will change: The rest of the cast, including Allie MacKay, Jensen Karp, producer Dave "the King of Mexico" Sanchez, production whiz Omar Khan, jack-of-all-trades Johnny "Beer Mug" Kantrowe and assistant producer Christine Fung remain.

And thank goodness for that. R.I.P. Bean, but for the rest of you, I'll be tuning in on Monday!
Posted by Michael Schneider at 7:11 AM

Thank you for sharing your tribute. As another guy who geeked out on Billboard charts (at the library) in the 60s & early 70s, who ended up being a college radio DJ on KLA-AM (at UCLA) with the guy who became KROQ's Spacin' Scott Mason, and who grew up listening to KROQ, albeit on AM 1500 during high school, your post made me feel nostalgic for the KROQ DJ's I loved: Sam Riddle, Jimmy Rabbit, and Shadoe Stevens. Yeah, I'll miss K&B too, and 30 years is amazing. Thanks.

Contrary to what you know or believe, KROQ was at is best when it had Jeff Gonzer and Larry Woodside at the helm of the morning show. Their scream contests were hilarious. Their musical selections were real. Jimmy Rabbit and his Pals of the Saddle were amazing bringing Outlaw country to LA.
People like Richard Blade were the antithesis of KROQ,

Nice piece. It's true. Bean is a wonderful interviewer. I was always impressed with the way he hit every note he was required to hit while still being entertaining.