MIKE ON TV: Talking "The Walking Dead" and More on Sundance TV's "The Writers' Room" 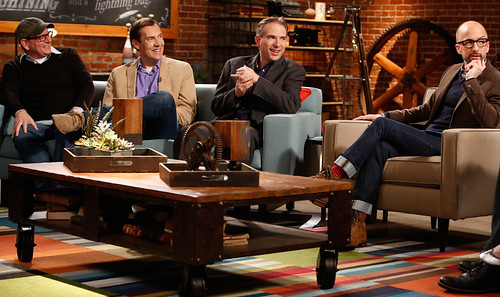 Sundance TV and the producers behind "The Writers' Room" were kind enough to actually put me on camera and participate in a special episode devoted to "The Walking Dead" and "Smallville," as well as a general conversation about how genre and comic book adaptations have taken TV by storm. I also got to spend some time behind the scenes while another episode, devoted to "House of Cards," was shot. Jim Rash is the perfect host -- a man who understands writing, acting and TV in general -- and I admire the work he puts into being prepared for the show. (Lots of binge TV.) And the Sundance folk are good people.

"The Walking Dead" creator Robert Kirkman was most of the episode's focus, but "Smallville's" Al Gough and Miles Millar also appear in the second half. Blair Butler and I round out this panel.

Watch it tonight! But if you want to get a gist of the show, I make an appearance in both of the Sundance TV promos seen below! Check it out as Robert Kirkman talks about the evolution of "The Walking Dead" and I add a few comments:

Read more about the show here. An excerpt from my TV Guide Magazine story:

Zombies have treated the brains behind AMC's The Walking Dead very well. But Robert Kirkman, who originated the comic book series that inspired the show, admits the early days of his career were slower than, well, the undead. "You have to be crazy to get into [writing]," Kirkman tells SundanceTV's The Writers' Room, which digs into the art of creating some of TV's biggest series. "I went massively into debt."

On April 25's special comic book-themed episode, Kirkman recounts some of the obstacles he faced in getting the TV adaptation of The Walking Dead made. That includes the NBC development executive who gave Kirkman a disheartening note: "I love this, but does it have to have zombies in it?"

Also in this episode, Smallville creators Al Gough and Miles Millar discuss how they fought the odds to get their show on the air in 2001 — back when comic book adaptations weren't in vogue. "Pre-9/11, the reaction was negative," Millar says of his series. "But after that, people were ready for a hero."

Smallville aired at a time before social media, streaming and time-shifting changed the way viewers experienced television. Kirkman admits it's tough now to ignore all that chatter, but in the end, "we only try to satisfy ourselves. That's the big truth."

In Season 2, The Writers' Room also features the writers, executive producers and stars of Scandal, House of Cards, The Good Wife, Sons of Anarchy and Pretty Little Liars. Jim Rash, who plays the naive Dean Pelton on NBC's Community, returns as host. 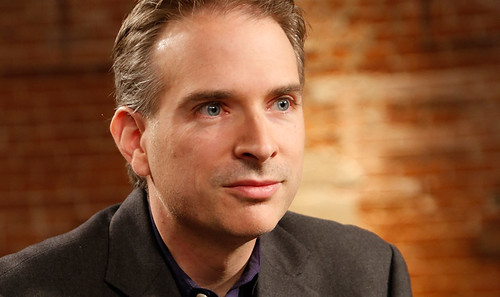 "Hmm, where will my media whoredom take me next?"
Posted by Mike at 9:21 AM