We Found It, The Actual L.A. Location of Don Draper's Childhood Whorehouse 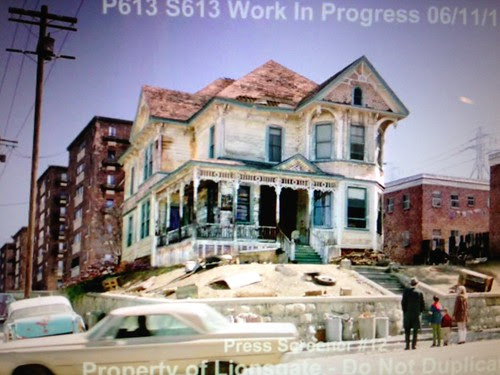 Pity young Dick Whitman/Don Draper. The childhood orphan wound up growing up in a Pennsylvania brothel with a stepmother who didn't love him. (At least he had the occasional Hershey's bar.) Season six of "Mad Men" featured several flashbacks to Don's teenage years in the whorehouse, leading to the final scene of the season finale -- in which Don (Jon Hamm) takes his kids to the home (now, years later, in complete disrepair, see above). 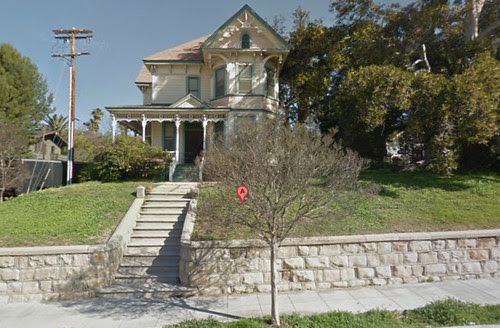 Don Draper's childhood whorehouse, located at the corner of Douglas and Carroll (that's the Google Maps photo above), was built in 1887; is six bedrooms/one bath; 3,160 square feet -- and valued at just under $600,000, according to Zillow. (That sounds remarkably low, given the size and the historic value.) 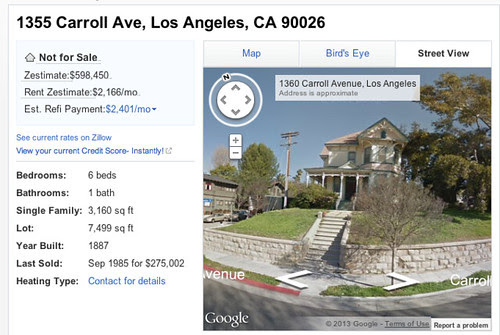 Note a few important differences: "Mad Men" added *a lot* of CGI to make the house look more rundown than it really is. Plus it's surrounded by apartment buildings in that digitally altered scene from the show, but in real life it's just more homes. (At least the power lines on the left appear to be authentic.) Interestingly, this publicity shot for the show, found on Richard Rushfield's Tumblr, appears to also be without those digital alterations: 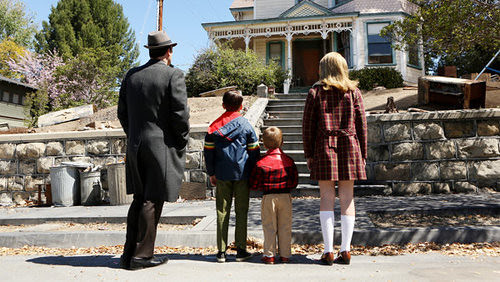 How popular is this house as a film location? The Google Maps photo of the house happens to catch a shooting trailer and "No Parking" signs all around the house: 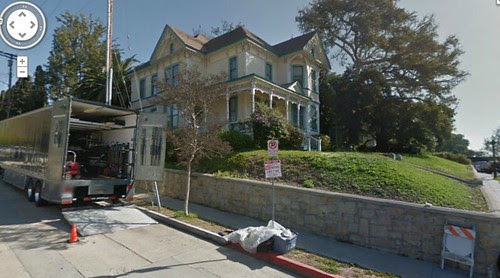 Meanwhile, Nicole Verhamme, who lives across the street from Don Draper's childhood whorehouse and goes by the handle @slowdowncoletrane, has chronicled the "Mad Men" shoots. Check out this pic she snapped from her window: 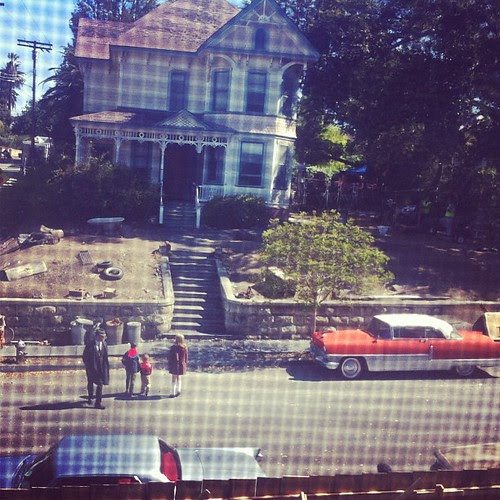 "Once again, woke up on the set of a Mad Men shooting, & yes, that IS Jon Hamm right in front of me...!!!!" she writes. (Pic by @slowdowncoletrane)

Obviously they did add some junk to the front yard, it's not nearly as nice as the yard in the Google Maps pic. But the house sure doesn't look this shabby: 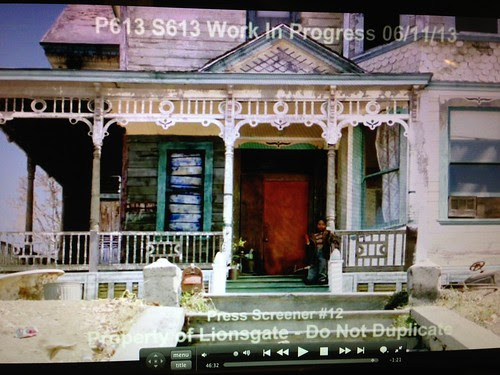 And by the way, it goes without saying, but there are no smokestacks on the other side of the street, despite this shot: 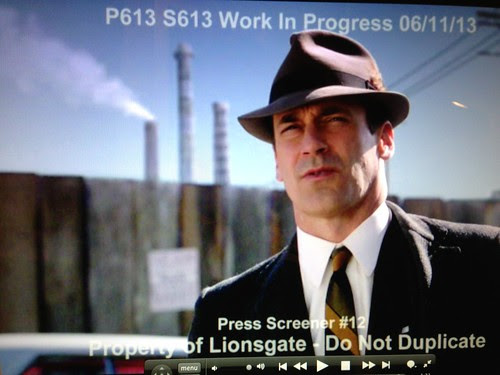 We've marveled for years about how "Mad Men" has expertly managed to turn Los Angeles locations into mid-century New York (as well as Rome and other locales). Check out some of our past posts here.

How amazing was that Season 6 finale, by the way? It really sets the stage for perhaps a new, introspective Don Draper. And it also gives us plenty to think about as we wait for the show's final season next year. I spoke to creator Matt Weiner about the season ender; read that TV Guide Q&A here.
Posted by Mike at 12:38 AM

Carroll Avenue was famous for years as having been the site of the Michael Jackson "Thriller" house, located at 1345.

They also filmed scenes from "Chinatown" and "LA Confidential" there...
...when I was in high school, the houses WERE that run down, but once they began gentrifying the neighborhood (it had been upper middle class in the late 1800s)at the end of the 20th century, many neighbors would purposely keep the exteriors a little rundown to make them less desirable for break-ins.

Hershey Bar? I think you mean the Hershey Highway. ;-)

No Hershey bar is correct. Watch the episode.

No, I second Hershey Highway.

Unknown said...
This comment has been removed by the author.
1:37 PM

I think the filming in the Google Street view was from shooting J Edgar with Leo DiCaprio.

Was that house also used in The 'burbs ?

no the burbs was shot on Colonial Street on Universal studios lot.. same street used for Desperate Housewives

Sorry Anonymous, the City of Los Angeles spells it "Angelino Heights," so that's what we're going with:
http://www.preservation.lacity.org/hpoz/la/angelino-heights

Unknown said...
This comment has been removed by a blog administrator.
5:08 AM

Anonymous said...
This comment has been removed by a blog administrator.
3:18 AM

I am still trying to wrap my head around all the "Ladies of Night" sharing ONE bathroom! (giggle)
Excellent detective work, Mike!