Return to the Hollywood Bowl: Cynthia Erivo in Concert 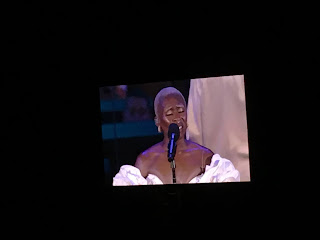 Emmy nominee Cynthia Erivo (“Genius: Aretha”) wowed the audience on Friday as she took to the stage for the first time ever at the Hollywood Bowl. Maria and I attended via Nat Geo, which is hoping to spread the word about Erivo as Queen of Soul Aretha Franklin in the limited series. 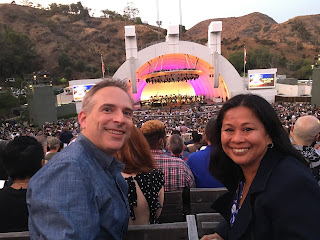 My colleague Jazz Tangcay was there as well, and filed this report:

Erivo took to the stage shortly after 8 p.m. in a breathtaking white gown with puff sleeves that looked liked roses. It was the talk of the night — after her dazzling performance, of course.

What better way to kick off a Hollywood Bowl debut than with a dynamic rendition of Barbara Streisand’s “Don’t Rain on My Parade,” backed by the orchestra giving the song a full philharmonic treatment? It was the only Broadway number Erivo would sing.

The empowering night of jazz, soul, classics and a sprinkle of Broadway ended on a fabulous high note – Aretha Franklin.

Erivo starred in National Geographic’s “Genius: Aretha,” which scored her first Emmy nomination for lead actress in a limited or anthology series or movie. There were voting members in the audience, and Erivo may have just secured a few votes after her remarkable setlist, whether they’ve seen the series or not. Her belting ability was on full display.

She sent the crowd home on a high note with a successful adaptation of Franklin’s “Freeway of Love.” The audience didn’t want to leave, but with the Bowl’s strict curfew of 11 p.m. not too far off, they had no choice. She offered an encore and a cartwheel to end the night. 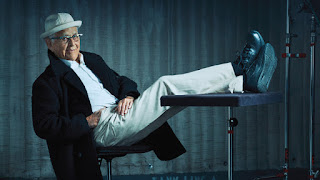 That’s it, that’s the post — Norman Lear turns 99 on July 27, and we are all still lucky that he’s around and still producing great TV!


UPDATED: Indeed, Norman Lear had a wonderful birthday. Read about how he celebrated it here.
Posted by Michael Schneider at 9:00 AM No comments: 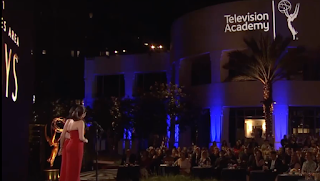 It was the first in-person event for the Television Academy in at least 16 months, and Saturday night's L.A. Area Emmys — held outdoors, in front of the TV Academy's North Hollywood headquarters — was another good sign that we're marching back to a new normal (although, as we know, the rapid spread of the Delta variant among stubborn, ill-informed anti-vaxxers may change all that).

Public broadcaster KCET, which had led all local TV stations in nominations for the this year’s Los Angeles Area Emmy Awards, also wound up taking home the most (for the fifth year in a row), with nine awards. It was followed by Telemundo’s KVEA and Spectrum SportsNet, both of which landed six.

Click here to see this year’s nominees and winners.
Posted by Michael Schneider at 10:23 PM No comments:

‘Ted Lasso’ Returns for Season 2 With a Spectacular In-Person Premiere Event; Plus: Where to Get Your Free Lasso Biscuits 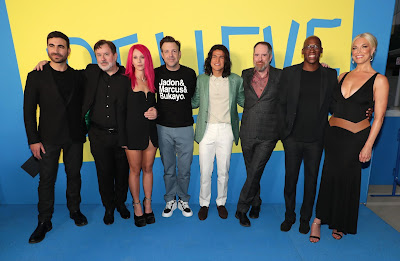 It's good to be Apple TV Plus these days, with a critically acclaimed (and now Emmy nominated) hit like "Ted Lasso" entering its second season. Apple, you may have heard, has some cash, and the spent some on the show's Season 2 premiere event last week. I got to go, and was quite impressed by the size and scope of it. This wasn't your average TV premiere. The red (er, blue) carpet was held outdoors on the roof of the Pacific Design Center in Los Angeles, where Apple built a custom blue soccer pitch for the series. Before screening the first two episodes, guests ate stadium food like sliders, popcorn and hotdogs. The afterparty moved to nearby Cecconi’s for what was described as "elevated pub food," such as fish and chips, sausage rolls, chicken/veggie tikka skewers, pizza and more. And everyone left with a box of Ted Lasso's “biscuits with the boss." 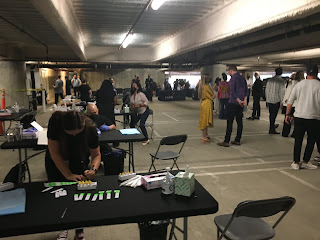 Attendees were required to show proof of vaccination, and also that morning were also told that a negative COVID-19 test was required. Apple set up rapid testing in the Pacific Design Center parking garage, and although it was one extra step before entering, I think it gave everyone there extra piece of mind. So much so that, as I mentioned above, people were shaking hands. Again, let's stop doing that!

Meanwhile, even if you didn't get a chance to attend the premiere, there are plenty of opportunities to enjoy some "Ted Lasso" biscuits (aka shortbread cookies, for us Yanks). Believe:

Starting today, Monday, July 19, through Friday, July 23, four Go Get Em Tiger locations across Los Angeles will have complimentary biscuits available in their signature pink box, with a note from Coach Lasso for fans to enjoy, with every coffee or tea order while supplies last.
On July 19, biscuits and coffee or tea will be FREE for all guests from 10 a.m. PT to close.
On July 20-23, biscuits will be free with purchase and fans can get coffee or tea for $1 with Apple Pay.

Between Wednesday, July 21, and Monday, August 30, Apple TV Plus is bringing AFC Richmond Stadium to Palisades Village (15225 Palisades Village Lane, Pacific Palisades). Guests to the “stadium” can enjoy complimentary biscuits and their own “Believe” sign.
The stadium installation will be open daily between 9 a.m. and 6 p.m. PT.

Fans can enjoy complimentary biscuits, tea and coffee at a pop-up location at the Studio City Farmer’s Market and other pop up locations in the Valley on Saturday, July 24 and Sunday July 25.
Posted by Michael Schneider at 10:32 AM No comments:

MIKE ON TV: ‘History of the Sitcom’ Producers on Carl Reiner’s Last Interview, Tackling ‘The Cosby Show’ and What Makes a Comedy 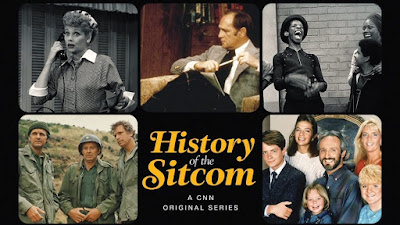 The producers behind CNN’s new eight-part docuseries “History of the Sitcom” knew that trying to tell the complete 70-year history of the TV genre would be an impossible task. So they divided some of the biggest comedies of all time into specific categories — and set out to illustrate how the evolution of the sitcom mirrored real-life advancements in society.

“It was pretty apparent that given the number of sitcoms that have been out there in history that you couldn't do some sort of comprehensive, start-to-finish history, as though you were in a college course studying it from beginning to end,” says executive producer Bill Carter. “There had to be a way to categorize them and follow them according to some grouping. We have eight episodes; we could have done at least 80.”

“History of the Sitcom,” which airs on Sunday nights, is the follow-up to CNN’s recent “The Story of Late Night.” Both come from Cream Productions, through the CNN Original Series banner. But whereas “Story of Late Night” had an obvious chronological lineage to tell the story (Steve Allen to Jack Paar to Johnny Carson, and so on), Carter and showrunner/executive producer John Ealer say it took some time to figure out the best way to tell the “History of the Sitcom.”

“In some ways, you need a bigger story than just the sitcom in order to link them up together and that has to be the story of America,” Ealer says. “That was kind of our approach, whether it be the American family, how friendships in America have evolved, how work in America has evolved, how race and gender have evolved and how escapism has evolved. That's how we came up with these themes.”

(Thanks to Charles Pannunzio for the pic!) The producers conducted a total of 184 interviews for “History of the Sitcom,” including stars, producers, executives and journalists (including me, yes you've already seen me pop up a few times!). And they did it all in the middle of the COVID-19 pandemic.

Read more about it here and catch up via on demand! Just don't tell me if I sound like an idiot on the show. I think I already know the answer.
Posted by Michael Schneider at 3:00 PM No comments: