End of an Era: Lisa May, "Doc on the Roq" Depart KROQ After More Than Two Decades 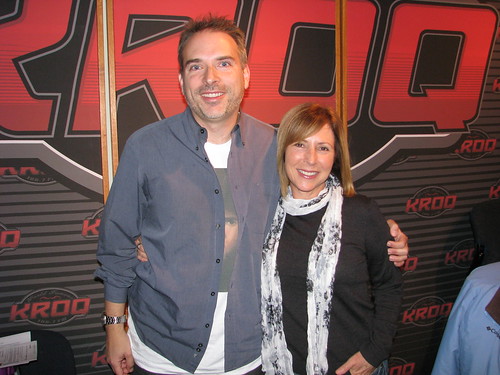 Radio isn't known for its longevity -- it's a tough business, particularly for on-air talent. Even the best ones frequently find themselves hopping from market to market. So it's all the more amazing that the Kevin & Bean Show is celebrating its 25th anniversary this year.

But change is in the air: After 24 years, longtime "Kevin & Bean" traffic reporter Lisa May (that's her, above with me at the KROQ studios in 2012) has left the show. Ditto Boyd R. Britton, a.k.a. "Doc on the Roq," who had been at KROQ for 27 years, and produced news capsules for the morning show. KROQ is doing away with both traffic and news in the morning, and more changes are to come.

Lisa May's past gigs include working as a DJ at a country station in the Valley, while Britton has been in the market for years, working for KKDJ, KIIS, KTNQ, KWST, KHTZ and KNWZ, according to LARadio.com.

Kevin & Bean announced the change this morning. The duo, plus Ralph Garman and Lisa also addressed it on Twitter: 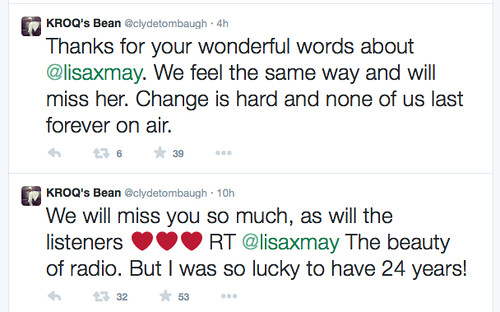 Good luck to Lisa as she moves on to her next adventure!

UPDATE: Meanwhile, K&B has a new female voice: Former KTLA reporter Allie MacKay, who joined the show on Monday. Here's the report from All Access:


CBS RADIO Alternative KROQ/LOS ANGELES has added ALLIE MAC KAY to the cast of the KEVIN AND BEAN show. MAC KAY, who most recently appeared on the KTLA morning show for the last six years, started this morning.

The move comes on the heels of the departures of morning news anchor DOC ON THE ROQ (NET NEWS, 2/19) and traffic reporter LISA MAY (NET NEWS, 2/23) “DOC ON THE ROQ and LISA MAY have both been valuable and long-term members of the KEVIN AND BEAN cast and we appreciate all of their contributions, CBS RADIO VP/Programming and KROQ PD KEVIN WEATHERLY said. “As of today, we have added frequent guest and fill-in ALLIE MAC KAY as a full-time addition to the KEVIN AND BEAN show.”

“Today was my first day as part of the dysfunctional family that is "The KEVIN AND BEAN Show" on KROQ,” she wrote on her FACEBOOK post. “Growing up here in L.A., if you would have told me this was even a possibility, I wouldn't have believed it. At the same time, change isn't easy (for anyone involved) especially when you come after someone so beloved. I'm just there to do my best and hope it makes you happy (for some of you … that will hopefully come in time).”

She was a member of the team. They should have terminated the KOM.

I remember when the Poorman did the morning show, so I've seen lots of people come and go. However, it really sucks that they didn't give her a chance to say goodbye.

Just remember, like Kevin and Bean have always said "One day you'll turn on the radio and we just won't be there, the website will be down, it will be like we never existed". Unfortunately that's how it works in the radio world, they don't want to take the chance of the person saying something defamatory on air, so it's their blanket policy to just take the person off the air without taking that chance.

Such a bummer, as Kevin said, she was MUCH MUCH more than traffic. The show won't be the same without her.

Kevin didn't say she was more than traffic. @Art_chris said that, which Kevin retweeted.

Wait!!!
The lovely Lisa May is gone, but we still have beerfuck...err, beermug!!!
WTF KROQ!!

Really disappointed, Lisa was cool and I really liked Doc on the Roq's newcasts. The K & B morning show has changed so much, not sure if I will continue to listen, definitely not for the time being. :(

Why when Sports was eliminated, did Money get a free pass to remain a part of the K&B family? So did Big Tad who definitely WAS fired. On the eve of the Radio Hall of Fame award K&B fired two major contributors to the success of their show. Nice classy touch. And their attitude towards long time listeners is disgusting. I stopped listening after the 2nd day without Lisa May and Doc.

Jimmy left for bigger things..Adam left for bigger things..they werent dumped. it's bogus that they use these guys as examples. I've given the show a month and I don't see the "fresh product" impact that cutting lisa was supposed to provide. Nice anniversary K&B. I can't imagine the show will gain as many new listeners as it'll lose because of how it was handled. They could've at least offered lisa the job..

The situation was poorly handled and Lisa May deserved more respect. Kevin and Bean are not exactly fresh and new either. Ralph is too sarcastic that people won't care if he is gone. I have listened to this show for more than half of my life and now my morning family are Heidy and Frank.

If anyone had half a brain you can see what management did: 1) didn't let Lisa say anything on air. 2) replaced her with another woman. This is a an A-typical ahole move on KROQ's part. if it was K&B's choice to "go younger" to "stay alive" lets all pray that their 25 year regein ends here. I know a lot of people won't be listening to KROQ anytime soon.