I save almost everything, and sometimes that comes in handy -- like when I realized that the copy of the Class of 1997 1996 Northwestern freshman facebook must include a pic of Young Seth Meyers. And here it is: Seth Meyers, the freshman from Manchester West High School in Bedford, N.H., whose hobbies include "baseball" and "film."

Meyers will be here at the Television Critics Assn. press tour later today to promote the launch of "Late Night with Seth Meyers," which starts on Monday, Feb. 24.

UPDATE: Thanks to my sister Melanie for combing her Northwestern 1996 Yearbook to find Seth's senior photo. Talk about a change, as Seth was in his long-hair, hippie-ish phase. (Melanie regularly saw him perform as a part of Northwestern's Mee-Ow comedy show; I had already graduated a year earlier.) Here you go: 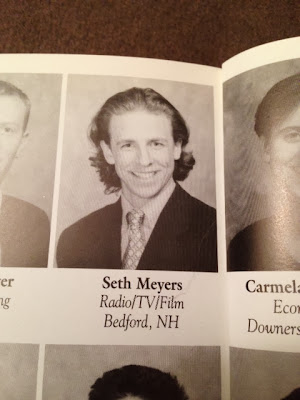 In a weird way, I think freshman Seth looks a lot more like the Seth we know now!
Posted by Mike at 11:09 AM

Wasn't he class of 1996? I swear he was a senior in 95/96 when my friends and I were obsessed and went to every Mee-Ow performance that year.

I'm in that facebook and remember Seth. The facebook was published in the fall of 1992 when we started at NU, and we are part of the class of 1996.

His senior picture in the 1996 yearbook is just as good. He was going for the long, flowing locks look then.