Another Terrible Accident at the Silver Lake Trader Joe's 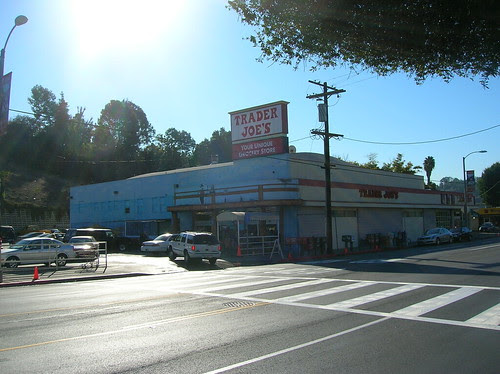 Silver Lake Trader Joe's crew member Adam Authier was hit on Hyperion Ave. last month while riding his bike home after working all night. What's worse, it was a hit and run -- another Trader Joe's employee eventually found Authier unconcious on the side of the road.

Authier wasn't killed, but sustained massive injuries and remains in the hospital. A Trader Joe's employee I talked to on Sunday night said Authier was recently moved out of the ICU, but it remains unclear when he'll get to leave the hospital.

Coincidentally, Authier was working at Trader Joe's the evening of January 20, when actor Bill Wingard was struck by a car , right outside the store (on the crosswalk at Monon, between TJ's and Gelson's). Authier was the first Trader Joe's employee to race out and tend to Wingard before an ambulance arrived; Wingard died soon after due to his injuries.

Wingard's death renewed the concerns about traffic on Hyperion -- the site of many accidents, as cars regularly speed down the street (which is frequently packed with pedestrians). Daniel Hernandez wrote last month that the accident that killed Wingard was particularly brutal:

I was told the impact was so strong the victim flew more than 25 feet and actually skidded on the concrete for about 5 feet. Poor guy... To die on a Saturday afternoon at Trader Joe's, crossing the street with thoughts of trail mix, frozen pizza, and white wine dancing in your head. And --SNAP!-- it's over.

I've crossed that intersection several times through the years... and it's definitely a scary one. You're never 100% sure if the cars racing down the street see you -- or if they're gonna stop.

Company of Angels, the Silver Lake theatre troupe that Wingard was a member of, set up a petition (now with over 550 signatures) to get the city to accelerate plans to slow down traffic on Hyperion -- and add a stop light to the crosswalk and intersection where Wingard was killed:

This accident made the news because that intersection is deadly. Cars travel very fast on Hyperion between Rowena and Fountain, despite the heavy pedestrian traffic in that square near Griffith Park Boulevard. There are frequent accidents. The crosswalk at Monon Street, between Gelson's and Trader Joe's, is in a bowl in the road, with tree cover, and not highly visible. Cars travel too fast to stop safely, even if they are willing to yield. There are pretty simple measures the city can take to reduce the number of accidents at that intersection. The city responds when enough people let them know we have a serious problem.

The city is at least listening. City Council member Tom LaBonge, whose 4th district includes Silver Lake, sent out a letter promising that work on a stoplight at the intersection will being in April, and will be operational by July.

Sadly, that's too late for Wingard -- and for Trader Joe's employee Authier.

To make matters even worse for Authier, when he was struck on Hyperion he was just weeks away from qualifying for health insurance. Which means he doesn't have any. And his recovery obviously hasn't been cheap.

That's why the Silver Lake Trader Joe's and the Company of Angels theatre are coming together to sponsor a benefit on April 1 at the Grand Avenue Club downtown (1024 S. Grand Ave.) from 1 p.m. to 6 p.m.

Event will include local bands, a silent auction, conetsts, food and a spot to donate money. The Silver Lake Trader Joe's crew has already been soliciting donations, and the employees themselves have been donating their absent reserve time to him.

Meanwhile, let this serve as a reminder to always be careful while walking or riding your bike... and always assume those cars aren't going to stop for you.

Anonymous said...
This comment has been removed by a blog administrator.
1:46 AM