Twin Sisters, Separated at Birth, Get to Know Each Other 35 Years Later 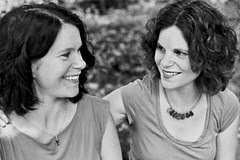 A few years ago, my former Variety colleague Paula Bernstein (above, right), who'd been adopted as an infant, got a call from her old adoption agency. It was a bombshell like no other: Paula was told she had an identical twin sister.

What's more, she found out that they'd been separated at birth -- and more shockingly, were originally part of a secret study on separated twins.

She soon discovered that her sister, Elyse Schein (above, left), was also a writer. It was Schein who first discovered that she had a twin, after starting a search for her biological mother. From there, Paula and Elyse began investigating their mother's past... while adjusting to the fact that, after more than 30 years, they'd both gained a sister -- and one who looked almost the same.

The siblings chronicled their journey in the upcoming Random House release "Identical Strangers: A Memoir of Twins Separated and Reunited." Paula just sent word that the book officially comes out on October 2. You can check out their website here and their MySpace page here. 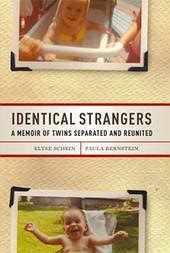 As they reunite and take their tentative first steps from strangers to sisters, Paula and Elyse are also left with haunting questions surrounding their origins and their separation. They learn that the study was conducted by a pair of influential psychiatrists associated with a prestigious adoption agency.

In alternating voices, Paula and Elyse write with emotional honesty about the immediate intimacy they share as twins and the wide chasm that divides them as two complete strangers. Interweaving eyeopening studies and statistics on twin science into their narrative, they offer an intelligent and heartfelt glimpse into human nature.