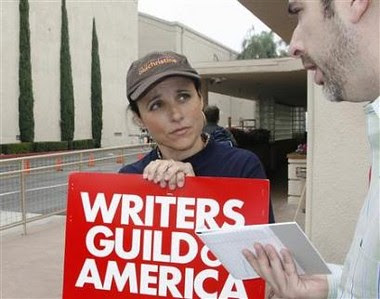 Actress Julia Louis-Dreyfus, star of the Warner Bros. Television series 'The New Adventures of the Old Christine' and a member of the Screen Actors Guild is interviewed by a reporter (R) at Warner Bros. Studios in Burbank, November 5, 2007 as she joins members of the Writers Guild America who are on strike against Hollywood film and television producers. (Fred Prouser/Reuters)

Sorry about the beard. I trimmed it this morning. (See the Reuters post here.)
Posted by Mike at 11:16 AM