Driving While Phoning: One Month Left 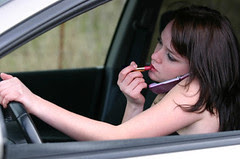 For all of you who don't have a hands-free device but hafta, just hafta use the phone while stuck in traffic, you've got a month left. The L.A. Times answers the pertinent questions:

If you're 18 or older, you are prohibited from holding a phone and talking while driving. If you're 16 or 17, the only time you can use a cellphone at all while driving is in an emergency.

The first offense will result in a $20 ticket, and subsequent citations are $50 apiece. But with court costs and penalties, the true costs of those tickets are $76 and $190, respectively.

Something else to chew on: The new laws go into effect just days before the California Highway Patrol goes on "maximum patrol" throughout the Fourth of July weekend. That means 80% of CHP officers will have their eyes on the road. And on you and your cellphone.

The paper notes that, oddly, texting while driving isn't covered by the new law. But don't go typing your OMGs and LOLs while speeding down the 10 -- CHP says it'll nab you for distracted driving.

Will the roads be safer? Who knows, the paper says. Some argue that drivers are distracted by the conversation itself, and that won't change.
Posted by Mike at 12:01 AM