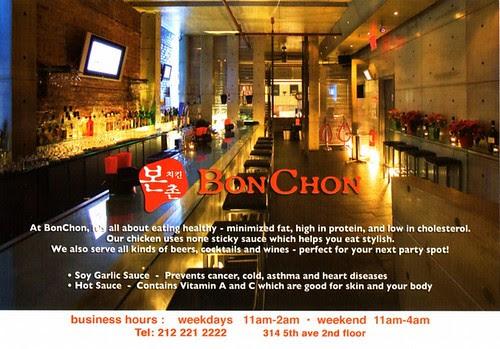 They stipulated: Korean Fried Chicken is cooked in oil, then set aside, before being cooked in oil again for extra crispiness. BonChon's chicken is coated with either a soy garlic or "hot" flavor.

We stipulated: For my last night in New York, my Gotham friends Lisa and Hank promised me the best damn chicken I've ever tasted. (Well, they promised pretty good chicken.) I was sold. 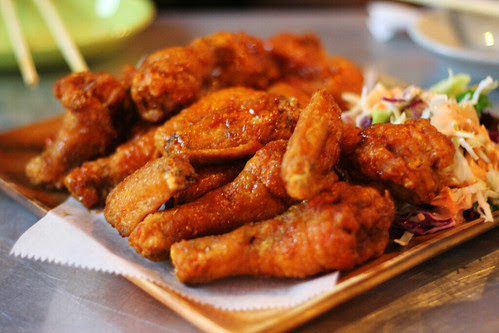 What we ordered: Large plate of chicken (wings and drumsticks), half with hot, half with soy garlic.

High point: Holy crap. Hank had hyped BonChon for days. I'd honestly not clued in on the Korean Fried Chicken craze, which seems to have hit NYC first. (BonChon's L.A. outpost just opened here two months ago.) Lisa and Hank tell me they're here every week, and I can see why. The chicken -- how can I describe? It's like candy. You bite into the skin -- and I HATE chicken skin, I NEVER ate it, at least until Korean fried chicken came along! -- and it's like biting into a piece of chicken fruit. Also, like anything this good, you can't eat just one. Or eight. I prefer the hot chicken, which contains just the right amount of fire for a fan (like me) of all things spicy.

Coincidentally, the L.A. Times wrote about the Korean fried chicken craze on Thursday, the very same day I was trying it out in Manhattan. Here's their take.

Low point: The thousand island dressing-laden salad and the pickled radishes are just OK... but it doesn't matter, you're there for the chicken. 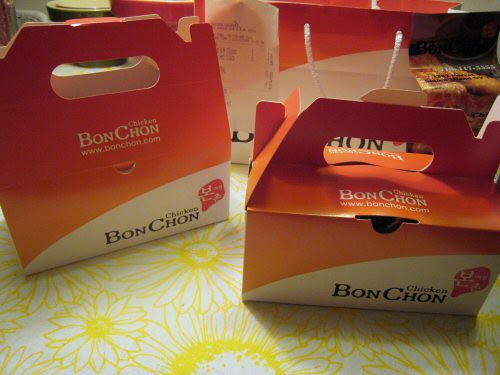 Overall impression: Haven't visited the L.A. outpost, but the Manhattan spot is all the more intriguing because of its location -- it's hidden on the second floor of a non-descript building. You've gotta climb some narrow doors to get to the second floor... and then you're suddenly in a dark, nightclub atmosphere with booming dance music. And tons of young New Yorkers tearing into drumsticks. Meanwhile, BonChon's website touts the healthiness of it all... but c'mon, it's fried chicken. But I don't care, it's too damn good. If it takes a year off your life, so be it. 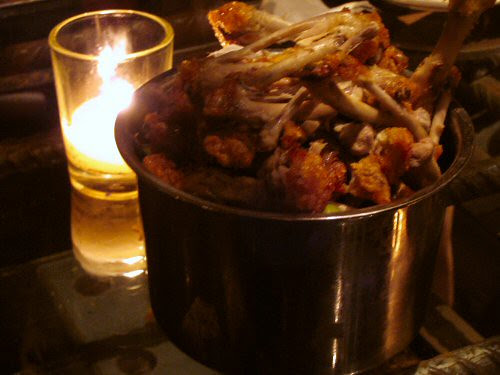 Chance we will go back: Oh, there will be several field trips to the L.A. location in the coming weeks as I introduce all of you to the joys of Korean fried chicken. Who's game?

For a complete list of our more than 170 restaurant reviews, check out our companion Rate-A-Restaurant site.