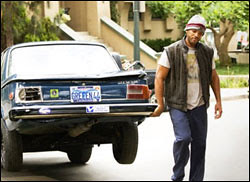 Variety's Todd McCarthy was not a fan of the new Will Smith anti-superhero pic "Hancock," which releases next week. I caught a screening last night, and yes, there are plenty of plot holes that left me scratching my head. But I'm easier to please, and I came away at least having had some fun with the pic.

Story aside, there's something comforting and fun in seeing the interaction between Smith, Jason Bateman and Charlize Theron on screen. (It's always great seeing Bateman in anything.) The story -- a reluctant superhero who frequently does more harm than good -- is also an intriguing one, although, as McCarthy notes, perhaps they didn't take full advantage of it. I do like the movie's nod to modern society -- Bateman's character relies on YouTube, for example, to show Hancock some video footage of his follies.

Regardless, as a fan of Los Angeles, I of course too special interest in the film's expansive use of the city -- and Hancock's semi-destruction of some L.A. buildings and landmarks. The brand-spanking new CAA tower in Century City gets a hole torn in it, while a car is thrown on the Capitol Records building's spike.

There are also a few interesting continuity gaps: Hancock chases some bad guys down the 105 (remember when the freeway was shut down last year for the filming?), but suddenly the buildings around him are clearly downtown -- then suddenly he's in Hollywood.

Also, Bateman is seen drinking a Dunkin' Donuts coffee in his car at one point -- nice product placement for the DD, but not sure where the character found the cup, since there's not a DD store within 500 miles of us.

Other interesting tidbits: The climactic scene takes place at the futuristic, fictional "Mercy Hospital" -- actually downtown's CalTrans building. (That building seems to pop up in every Los Angeles shoot these days.) A big celebratory dinner is held at Cafe Pinot downtown. And fake newscasts are depicted via imaginary L.A. TV stations -- all with high, UHF channel positions like 15 or 17.
Posted by Mike at 10:15 AM