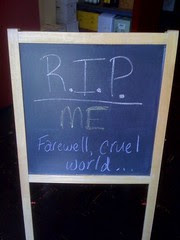 The folks at Eagle Rock's Colorado Wine Co. are still reeling from the loss of their sidewalk chalkboard sign -- which helped drive traffic into the store. The sign also was a small reminder to the neighborhood that, hey, interesting, lively things are happening here.

But turns out those sidewalk signs are illegal. The city is willing to look the other way until people complain -- and indeed, someone eventually did. Mr. Grumpy Pedestrian began his campaign against the sign rather passive aggressively -- kicking it to one side for starters. But then things escalated:

We would keep our dinky little chalkboard sign on our half of the sidewalk which is approximately 13 feet wide. Well, what began as a surgically precise shift of our sidwalk advertising became a grumble and a swift kick which ultimately left our advertising flat on the ground or facing the store instead of the street every day. Polite confrontations posing questions like "excuse me, sir, why do you do that" and "are you angry at wine?" became pretty heated with quotes like "all you people are only in it for the money!" and "why should I have to walk on the side of the sidewalk! I want to walk down the middle and it's a free country!" In it for the money? Clearly he's never been in retail.

To be fair, though you see these types of signs up and down every retail corridor in our city, they are illegal. And soon enough, after a few more run-ins with our friendly neighborhood sign abuser, we received a notice from the city forcing us to remove it from the public sidewalk. And when an employee accidentally put the sign out the following week, our landlords were summoned to appear before the city downtown! Ultimately, we settled with the city over the phone and all was forgiven provided we never EVER spit in the face of justice again by putting out our little chalkboard trying to make our business a little more noticeable.


The Colorado Wine folks have dubbed the guy "Mr. Very Angry Irish Man." MVAIM may soon find a new target of his ire: According to commenters on the Colorado Wine Co. site, the Coffee Table restaurant and bar up the street has started using a sidewalk sign as well.
Posted by Mike at 11:00 AM