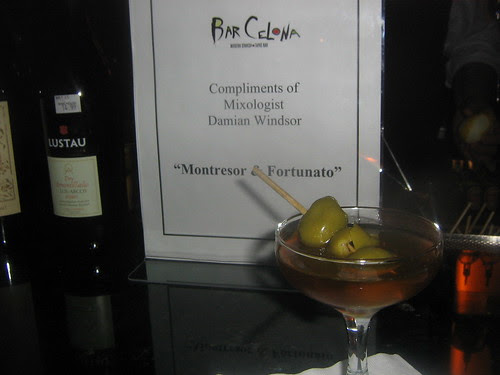 As overseen by Chef Josef Centeno (Opus, Lot 1), the new menu is being hyped as offering "new excitement and a new attitude" to the restaurant. It'd been a few years since we last checked out Bar Celona... and since Old Town Pasadena is close to Franklin Avenue HQ, I decided to enlist my friend Tony and check it out. 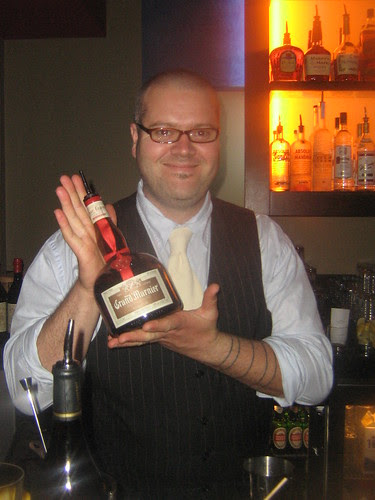 Upon arrival, we headed straight to the bar, where famed mixologist Damian Windsor (above) was concocting his creation, "Montresor & Fortunato." The sweetish drink includes sherry, Grand Marnier and vermouth (recipe below), and the olives are a nice touch.

Windsor's drink is among the finalists in Travel + Leisure's Beverage Arts Challenge, and it gets my vote. (Granted, I haven't tried the others. But Damian was cool, and I love his former home -- downtown's Seven Grand.) 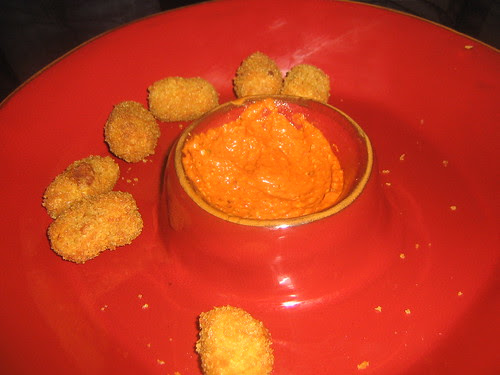 Meanwhile, the food passed around was heavy on the fried side; our favorites included the pork croquetas (above), which included goat cheese -- which I'm normally not a fan of, but they work here. 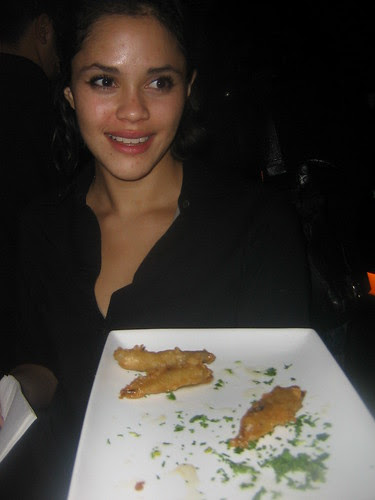 Least favorite item, probably the breaded anchovies (above). But other tapas included peppers with sea salt; pork shoulder, chicken liver and salmon conservas; whipped salt cod and potato on grilled bread; grilled shrimp; chicken empanadas; and more. I only wish that we could have sampled off the restaurant's new entree menu as well.

Meanwhile, we also got the rundown on the restaurant from co-owner Karen Huang, who told us that business was surprisingly good, despite the down economy. 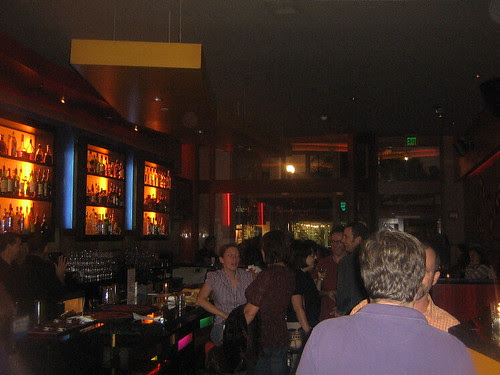 Among those we chatted with or saw in the crowd: Ritz Bites' Jessica Ritz; Eating LA's Pat Saperstein; Eater L.A.'s Lesley Balla; Gumbo Pages' Chuck Taggart; and Thrillist's Jeff Miller, among others.