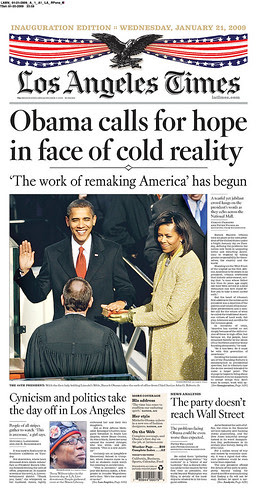 Wow, the L.A. Times really strains to make a pun with this two-line headline. I assume they're having a little fun with the chilly weather in D.C. with the idea of his "cold reality" -- but man, that's quite a stretch. The Times seems to forget that people plan to save this issue as a keepsake -- and to that end, a catchy, one-line headline might have made this issue much more valuable. (Short memory? Their election special, with the simple "It's Obama" hed, sold well and has been quite a little money maker for the paper. Why they didn't attempt to repeat that, I dunno.) B-.

But as much as the LAT missed an opportunity with today's paper, the Daily News' take is even worse. Yeah, it's neat to see the hundreds of thousands of people on the National Mall. But I can't even make out if that's Obama's back... and it doesn't matter, because it's still his back. That little inset picture of Obama above doesn't provide much of an emotional wollop either. C.

The Long Beach Press-Telegram's photo montage is kinda nice -- I like the "Brady Bunch" set up of Americans looking up at the new first couple. Not sure "hope over fear" is the most compelling headline; that's good for an election headline, but the inauguration is about looking ahead -- not looking back at a campaign that ended two months ago. But my biggest problem with the P-T lies with what it did to its own nameplate here. What a day to butcher your own name! Anyone saving this issue will one day look back at how the "Press-Telegra" covered the inauguration. B. 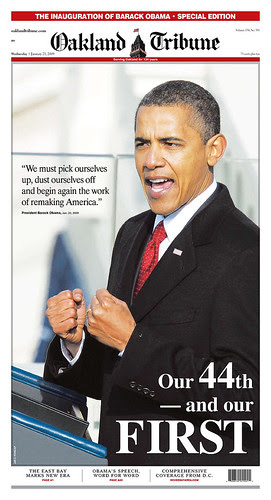 The Orange County Register brings us the Era of responzzz... oops, sorry. But really? "Era of responsibility"? Way to sell a couple thousand few newspapers than you could have today, OC Reg! And c'mon, maybe for one day you could have knocked out those skyboxes to give the inauguration piece a bit more heft? C. 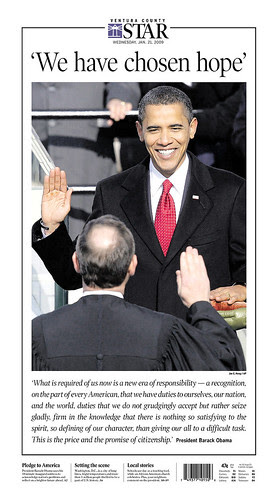 OK, the Ventura County Star gets it. They managed to get "hope" in the hed without then pissing all over it with the word "fear." They also emphasize a key passage in Obama's speech, have a nice, attractive shot of our new commander-in-chief and even de-emphasize their nameplate for the day. A-.

The Torrance Daily Breeze manages to trump its bigger Daily News cousin today. Nice shot of Obama taking the oath (nice action shot of Michelle watching her husband) and the simple -- albeit, generic -- "A new era" headline. Still don't love the "hope over fear" angle -- I'd actually go with the "responsibility" line as a subhed -- but at least it's the secondary headline. B.

For comparison's sake, Best Front Design said Newsday's cover was the best in the nation: 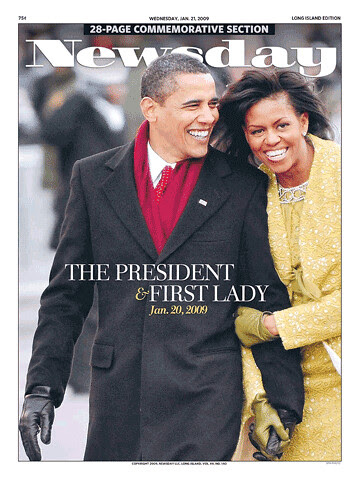