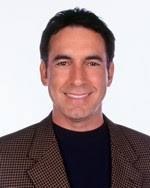 Following up on our post Tuesday on Rick Garcia's departure as sportscaster on KTTV (Channel 11), KCAL announced this afternoon that he'll be joining that station's key 8 p.m. and 10 p.m. newscasts. He'll anchor alongside Pat Harvey, who had most recently co-anchored with Sandra Mitchell.

Los Angeles, Calif., April 23, 2009 – KCAL-TV (Channel 9) has signed Emmy winner and Los Angeles native Rick Garcia to join Pat Harvey behind the anchor desk for the station’s weeknight 8 and 10 p.m. newscasts. He will make his debut tonight during KCAL 9 News at 10 p.m., immediately following the station’s broadcast of Game 3 of the NBA playoff series between the Los Angeles Lakers and Utah Jazz. The announcement was made today by Patrick McClenahan, President and General Manager, KCAL 9 and CBS 2.

McClenahan said: “Recruiting Rick Garcia represents a major addition to our news team. In addition to being a charismatic and intelligent broadcaster, I am very impressed by Rick’s deep roots in the community. Pairing Rick with Pat Harvey gives us one of the finest and most recognizable anchor teams in Southern California.”

Garcia has also been honored by the Minorities in Broadcasting Training Program with a Striving for Excellence Award which recognized his career achievements and community contributions.

A Los Angeles native, Garcia attended California State University at Northridge, Antelope Valley College and College of the Desert. He is actively involved with several community organizations, including the Facing Forward Foundation (which supports doctors who provide reconstructive plastic surgeries for underprivileged children with deformities), the Michael Hoefflin Foundation (supporting children with cancer), the Children’s Center of the Antelope Valley and the Boys and Girls Clubs. Since 2006, Garcia has provided the "Unity" award at Quartz Hill High School in the Antelope Valley, where he attended. The award grants a scholarship for two students at the school every year.

Garcia joins the KCAL 9 family after spending the past 22 years with KTTV-TV (Channel 11) and its Fox-owned sister station KCOP-TV (Channel 13) in Los Angeles. He joined KTTV in April 1987 as a weekend anchor and weekday reporter and began serving as the station’s weekday sports anchor in April 1988. Garcia served as host and executive producer of KTTV’s NFL post-game, “Fox Overtime.” He also hosted KTTV’s Major League Baseball post-game show, “Extra Innings,” since it premiered in 1999.

Garcia began his broadcasting career in radio in 1979 as an on-air personality, sports director and play-by-play announcer at KAVL-AM in the Antelope Valley. In 1982, he joined KTN, a cable television station in Palm Springs, as sports director in 1982. One year later, Garcia became the weekend sports anchor at KVBC-TV, the NBC affiliate in Las Vegas. In 1984, he joined KOAT-TV, the ABC affiliate in Albuquerque, in the same capacity. Prior to joining KTTV, Garcia was the weekday sports anchor at KTSP-TV, the CBS affiliate in Phoenix, from 1985-87.

In addition to being a member of the KTTV team that won Emmys for best newscast in 1997 and 2003, Garcia received Emmys for best sports feature, best sports reporting (twice), best sports series and best feature reporting. He has also received six Golden Mike Awards, the Edward R. Murrow award and numerous other honors from industry and community organizations.