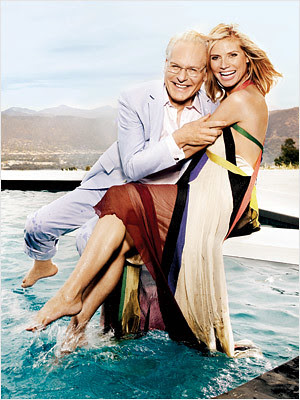 The media spotlight on Downtown L.A., looking great in "(500) Days of Summer," continued on Thursday night with the (long delayed) sixth season launch of "Project Runway" on new home Lifetime.

The new "Runway" contestants were housed at the Title Guarantee Building Lofts (located at 5th and Hill), and in the first episode party up on the roof -- allowing for great views of the downtown skyline.

The contestants also worked out of FIDM, while the famed Mood fabric store even opened up a pop-up location in downtown in order to service the contestants.

Oddly, the color of the L.A. establishing shots seemed awfully yellowish-orange -- a function of weird lighting, or something done intentionally?

The change from New York to Los Angeles has gotten a surprisingly good reaction for the most part. The Boston Globe, for example, wrote:

One positive change: The new “Runway’’ seems determined to make use of its new setting, milking Los Angeles for its self-perceived glamour. (There’s a bit of defensiveness involved; the cameras catch one contestant announcing that “LA’s garment district is, like, seven times bigger than New York’s.’’) At the start of tonight’s challenge, the designers step on the red carpet laid out for the Emmys - last year’s Emmys - and are tasked with designing gowns for the stars.

Yep, last year's Emmys -- a reminder that this season was shot lonnng ago, and held in limbo until NBC Universal and the Weinstein Co. could resolve their fight over the show's fate.
Posted by Mike at 12:55 AM