Los Angeles Magazine Wants You to "Get LA" 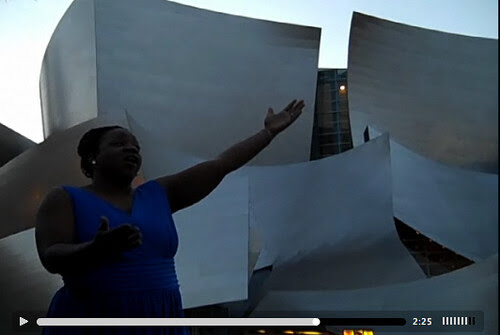 Los Angeles mag's new "Get LA" film competition is already underway -- but you still have until the end of the month to digitally capture your take on our city.

To kick off "Get LA," L.A. mag's Chris Nichols put together the short above (click to watch). To shoot "Designed for Dreaming," he convinced "21 of the city's optimists, futurists, and dreamers" to perform this poem, created for GM in 1956 as a nod to the future. City Councilman Tom LaBonge, architects Dion Neutra and Frank Escher, Los Angeles Conservancy executive director Linda Dishman, "histotainer" Charles Phoenix and soprano Dabney Ross Jones (above) are among the notables chiming in.

L.A. mag hopes to convince as many Angelenos -- both filmmakers and civilians -- as possible to create their own three-minute videos about Los Angeles. Details:

GET LA film competition is open to Los Angeles County residents. The films can biographical, documentary, fictional, or aspirational portraits of the city and its residents. In order to be accessible to diverse members of the community entry of a film into the competition is free. Submissions for the competition will run from February 3-March 3, 2010. Finalists will be announced and posted online March 15 to be judged by viewers (who will choose an “Audience Favorite”) and a panel of notable Angelenos as judges (who will choose an “Official Selection”). The winners will be announced in early April. Film entries will be submitted and viewed at lamag.com/citythink/getla.

Volunteer org L.A. Works is also sponsoring the contest, along with the new L.A. Magazine Foundation. It's also a part of L.A. mag's 50th anniversary "City Think" initiative.
Posted by Mike at 12:16 AM