Forty Years Later, An Empty Pit Remains Across the Street From City Hall 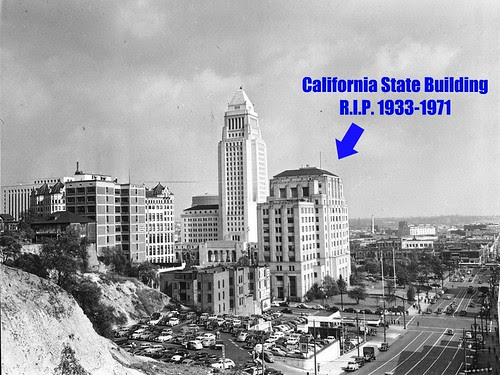 I was glad to see the L.A. Downtown News include that empty pit across the street from City Hall on its list of Downtown's 10 Worst Eyesores.

It's one of the great mysteries of downtown that has bothered me for a long time: How has Los Angeles allowed the pit across the street from City Hall to crumble, untouched, for FORTY YEARS?!

Employees can see down to that weed-strewn, graffiti-covered chunk of land right outside their windows, for heaven's sake.

A little backstory: The site was once home to the California State Building. The 13-story building, which opened in 1933, served as the southern headquarters of the state's administrative offices. (In the photo above, it's just to the right and in front of City Hall.)

But the 1971 San Fernando earthquake left the building uninhabitable. (Much like the 1933 Long Beach quake ruined many of Los Angeles' beautiful original civic buildings, including the 1891 red sandstone County Courthouse.) The California State Building was torn down, leaving just the foundation.

And then... nothing. The foundation is still there. Which means that the empty pit has now been in existence as long as the California State Building actually existed (exactly 40 years). 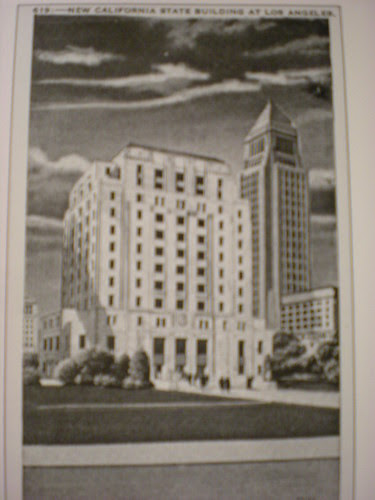 The Downtown News investigated why the pit has remained empty for so long -- and the answer is disheartening. Apparently no one is quite sure who has jurisdiction of the land -- and as a result, no one is really aggressively looking to do something about it.

In the late '80s, a tentative deal with developer Raffi Cohen portended a commercial office building with retail on the ground floor. But when the office market in Downtown soured, the Cohen deal dissolved.

Making matters murkier, the entire 4.6-acre block had been wrapped in a tri-party ownership between the state, county and city. Basically, the state owned the vacant lot, the county retained the parking lot and the city controlled a thin strip between them, which it eventually gave up. Some observers have blamed this dual partnership for decades of indecision.

Still, the land didn't sit vacant exactly: The Los Angeles Times reported that a massive homeless encampment had arisen on the property, embarrassing officials into exchanging flimsy wooden panels for the current fence...

When I finally reached the state's Department of General Services, they confirmed their stake in the property, but said no plans are in the pipeline.

"At this point we're just putting together how to best move forward," said Paula Gutierres of the DGS real estate division

That's code, I learned, for a lengthy market analysis slated for the site. Gutierres said the study will cost half a million dollars and include "45 or 50 different tasks." Ultimately, the land could become "anything from office to residential to retail." But not a park. And not anytime soon.

Sadly, a typical Los Angeles story. The 1938 Coulter's department store on the Miracle Mile was torn down in 1980 for development... but sat as any empty pit for nearly 30 years, until a new housing development was recently built there. And a parking lot still sits where

Here's how the footprint of the old building looks today, via Google maps: 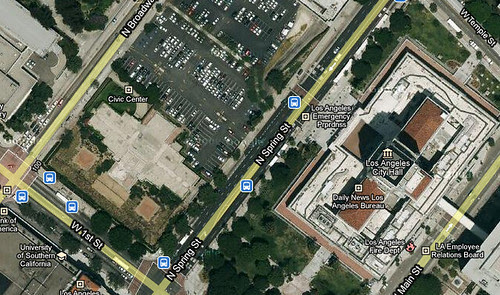