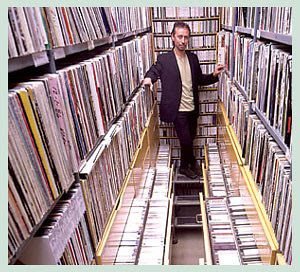 Surprising fireworks in the public radio arena today. First, KCRW announces Nic Harcourt's exit from KCRW to focus on his newish gig at MTV. Then, my ex-station (R.I.P., "Hawaiian Eye") KCSN announces that Harcourt is joining to host a weekend show.

Harcourt later told the L.A. Times that he felt KCRW "misrepresented" his exit, and that he originally hoped to continue at KCRW while doing a volunteer shift at KCSN. (There's precedent, as KCSN is unpaid, which means several KCSN jocks in the past have also worked at other public stations, like KKJZ, simultaneously.) But Harcourt said he was given an ultimatum: Pick one. He doesn't explain why he chose KCSN.

Here's part of the KCSN announcement:

KCSN/Los Angeles is proud to announce that legendary music industry veteran, Nic Harcourt, is joining the station. KCSN 88.5 FM is the non-commercial station that broadcasts a Triple-A format from California State University, Northridge.

Harcourt worked for KCRW/Los Angeles for 12 years, 10 as music director and host of the highly influential “Morning Becomes Eclectic” program... He has also helped launch the careers of Phoenix, Dido, My Morning Jacket, Death Cab for Cutie, Franz Ferdinand, KT Tunstall, Ting Tings, Sigur Ros, Damien, Rice, The Shins, Interpol and countless others. He has been described by music writer Mark Weingarten as “the most influential DJ in America.”

Harcourt has also been a music journalist for the Los Angeles Times, and currently holds the title of Music Supervisor in Residence for MTV. He also serves as host of the award-winning Guitar Center Sessions on DirecTV’s 101 and n3D channels.

Karen Kearns, General Manager of KCSN commented, “Nic’s status as a music tastemaker will be a great addition to our programming.”

Sky Daniels, newly appointed Program Director of KCSN added, “It is an honor to have Nic join us as we begin a new journey as the Album Adult Alternative station for Los Angeles. Nic defines music discovery for Los Angeles listeners and will bring that devotion to KCSN. His vision will be an incredible asset to our listeners.”

Harcourt stated, “Change is good. I’m truly excited about the opportunity to work with the team at KCSN as they build a dynamic new music format for Los Angeles.”

Read some of our past stories about Nic Harcourt here.
Posted by Mike at 6:44 PM