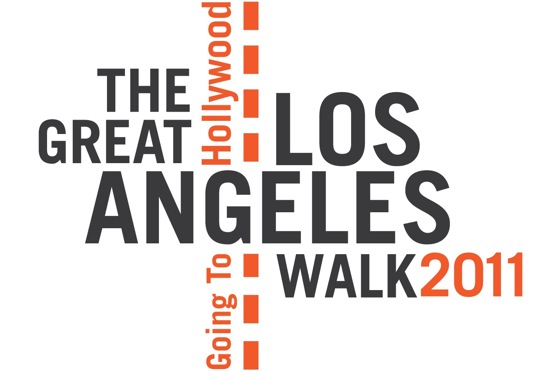 LOS ANGELES (Nov. 3, 2011) -- Hundreds of Angelenos will hit the sidewalks this November 19 for The Great Los Angeles Walk 2011 – the annual event that dispels the myth that “nobody walks in L.A.”

For the sixth annual event, participants of the Great Los Angeles Walk (http://www.greatlawalk.com) will once again hike from downtown Los Angeles to the ocean – but this time via Hollywood Boulevard. Participants will meet at downtown’s Triforium sculpture (at Fletcher Bowron Square – at Temple and Main -- across from City Hall) at 9 a.m. on Saturday, Nov. 19, and proceed to walk approximately 19 miles (at a casual, all-day pace).

The Walk will run down Temple, up Vermont Ave., across Hollywood Boulevard and down Santa Monica Boulevard to the ocean. Along the way, walkers will encounter sites such as City Hall, the Our Lady of the Angels Cathedral, LA City College, Musso & Frank's, Grauman's Egyptian and Chinese Theatres, the Hollywood Walk of Fame, the Hollywood Roosevelt Hotel, the Capitol Records building, Hollywood and Vine, and much more.

Walkers will pass through a diverse cross-section of the region, including Downtown Los Angeles, Echo Park, Los Feliz, Hollywood, Beverly Hills and Santa Monica. The Great Los Angeles Walk will conclude with an afterparty at Locanda del Lago restaurant in Santa Monica.

L.A. journalist and blogger Michael Schneider launched the Great Los Angeles Walk in 2006 as a way to celebrate his tenth year in Los Angeles. Inspired by the book “Wilshire Boulevard: Grand Concourse of Los Angeles,” by Kevin Roderick (with research by J. Eric Lynxwiler), he decided to walk the street’s entire length.

In 2007, for an encore, he chose another downtown-to-the-ocean route: Pico Boulevard. The 2008 Walk took on Santa Monica Blvd. (via Sunset). In 2009, the event kicked off in the historic West Adams district and walked to Venice Beach via Adams and Washington. And in 2010, for its fifth edition, the Great Los Angeles Walk reprised its original Wilshire journey.

The Great Los Angeles Walk grew from dozens of participants to hundreds, and continues to expand each year as more Angelenos join in to explore their city on foot.

As always, the Walk is completely free. It is up to the participants to decide how much or how little of the walk they want to do. The Great Los Angeles Walk has been featured in the Los Angeles Times, the L.A. Weekly, KABC-Channel 7, LAist.com and KNBC.com. ###
Posted by Mike at 2:17 PM

Maybe, i can join next year!