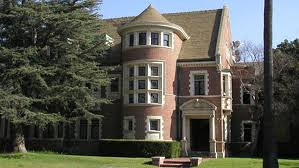 Got $12 million sitting around? The beautiful house seen in FX's "American Horror Story" is on the block -- and don't worry, a homicidal clown baby doesn't really live in the basement -- that we know of. The house will be featured in an episode of Syfy's "Hollywood Treasure," airing next Tuesday, May 29 at 10 p.m. Here's some detail on the house, which is being marketed by Profiles in History and Beverly Hills' Rodeo Realty:

Construction of the house began in 1904 and was completed in 1908. The Catholic Church added a chapel addition in 1954. The house sits on approximately 3/4 an acre and is around 12,000 square feet. The home was built by renowned architect Alfred Rosenheim and is currently a designated historic monument. The house will be going on the market for $12,000,000.00.

The house is located in the Country Club Park/Arlington Heights section of the city. When Curbed LA wrote about the house back in January 2011, before its superstardom, it was on the market for $4.5 million. That's quite a markup.
Posted by Mike at 12:14 PM

Sure, I'm going to jump right on that low price.