End of An Era: NBC Ends Its Burbank Studio Tour 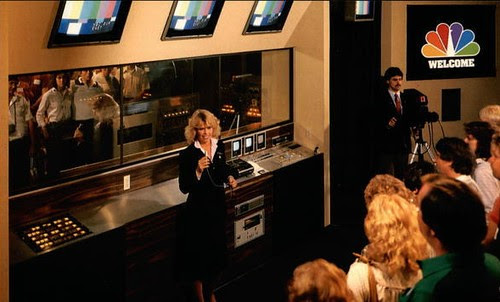 When my family would visit Los Angeles in the 1980s, one of the highlights for me was always the NBC Studio Tour. A trip to see the NBC lot was cool in itself -- I was steps away from the likes of Brandon Tartikoff, a name I knew thanks to reading TV Guide. But then we actually got to see the "Tonight Show Starring Johnny Carson" set when it was dark, plus walk past soundstages and see the local news set. For a 10 year-old, that was all awesome.

But in recent years, most of NBC moved over to the Universal lot. Leno's still there, as is KNBC (although even that is moving soon), but most of NBC is no longer there (and NBC doesn't even own the lot anymore, it just leases part of it) -- so I just assumed that the NBC Studio Tour had disappeared a long time ago. Turns out it hadn't -- but as Joe Flint reports at the L.A. Times, today's the last day:

A little bit of history will be happening in Burbank on Friday as the last tour of the famous NBC Studios will be happening at noon. For decades, tourists have been able to pop in on NBC's Burbank lot and get visits to sets including"The Tonight Show" from willing and cheerful pages. But the studio has been sold and most of NBC has or is moving over to the Universal lot so the tours are ending.

Coincidentally, just a few weeks ago I posted this 1983 "PM Magazine" report by Maria Shriver of the NBC Studio Tour:

Of course, Universal still does its famous Tram Ride as a part of Universal Studios, and the Warner Bros. studio tour (by appointment) is supposed to be well-done. But it's the end of an era as NBC continues to say good-bye to Burbank. Above and below (the old Carson set), publicity shots of the NBC Studio Tour used for postcards and promo materials in the early 1980s. 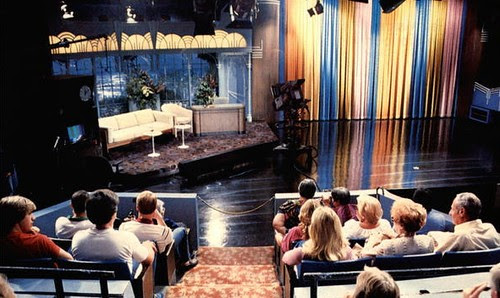 Even though there are no longer tours in Burbank, are tours still being presented in the Universal lot?