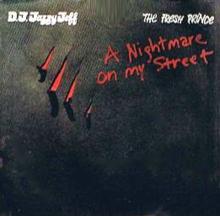 In 1988, DJ Jazzy Jeff & the Fresh Prince released "A Nightmare on My Street" as the second track off their album "He's the DJ, I'm The Rapper." The song climbed to No. 15 on the Billboard Hot 100, but then it virtually disappeared. Turns out the duo had created the song for inclusion in "A Nightmare On Elm Street 4," but New Line passed on the song -- going with a track by the Fat Boys instead. But Jazzy Jeff & the Fresh Prince (you now know him, of course, as Will Smith) went ahead and released the song anyway, and even created a music video for it. That's when an unhappy New Line stepped in and put a stop to it. The music video was destroyed; here's a fan-created one that I found on YouTube:

Leagle.com has an interesting roundup of what happened -- starting with the little tidbit that New Line was interested in finding a rap song for the movie because "40% of the 'Nightmare' series audience was Black":

During the latter part of 1987 and early 1988, in anticipation of the release of Nightmare IV in late summer, New Line decided to authorize the production of a music video based on the Nightmare series. The video was to be released in conjunction with the release of the fourth movie. New Line wished to use the music video as a marketing tool to promote the newest movie. It had used a music video to promote the Nightmare series previously because such videos are a common way to enhance penetration of the 15-24 year age market.

New Line decided that because 40 percent of the Nightmare series audience was Black, it would be giving something back to this audience by producing a Rap music video.

As early as October 1987, New Line began looking for an appropriate rap group to appear in the video. New Line communicated with a number of rap groups independently as well as a rap group agency. In December of 1987, New Line began negotiating with the manager of the Fat Boys, a popular rap group. The negotiations led to a proposed written agreement, which was neither signed nor finalized, by early March of 1988.

Meanwhile, in January of 1988, Barry Weiss, vice president of marketing/operations of Jive Records (which is affiliated with Zomba), contacted New Line to discuss the possibility of D.J. Jazzy Jeff and the Fresh Prince ("D.J. Jazzy Jeff"), a popular rap group, doing a video based on the Nightmare series, which would be jointly marketed with the movie. The music for the proposed video featured a song written by D.J. Jazzy Jeff entitled "A Nightmare on My Street," which was recorded in the winter of 1987.

In March of 1988, Weiss met with Kevin Benson, New Line's director of licensing and director of music, to discuss the music video proposal. At this meeting, Benson informed Weiss that New Line was also negotiating with the Fat Boys to do a song about the fourth Nightmare series movie. Benson, however, continued to express interest in Weiss's proposal and suggested Weiss inform others at New Line about the potential benefits of using D.J. Jazzy Jeff. Accordingly, Weiss sent letters to a number of New Line employees, describing his ideas for the project.

On March 30, 1988, Weiss and Benson discussed further the business aspects of the proposal. Weiss reduced his proposal to writing on April 4, 1988. Benson orally responded to the proposal by informing Weiss that the proposal was financially unacceptable to New Line. Weiss indicated that he would not improve the proposal.

On April 5, 1988, Zomba released the album "He's the DJ, I'm the Rapper," which contained the song "A Nightmare on My Street." The album became an immediate hit. Concerned about possible copyright infringement, New Line solicited an opinion of counsel.

Subsequently, New Line finalized the agreement with the Fat Boys. When Weiss contacted Benson on May 18, 1988, Benson informed him that the Fat Boys had been selected to produce the music video.

On July 18, 1988, Weiss received a letter from Seth Willinson, senior vice-president of New Line, informing him that New Line believed that "A Nightmare on My Street" infringed New Line's copyright. Willinson demanded that Zomba cease producing records containing the song and withdraw existing records from the market place.

On July 25, 1988, New Line commenced the instant action against Zomba asserting copyright infringement pursuant to the Copyright Act of 1976, 17 U.S.C. § 101 et seq. ("the Copyright Act" or "the Act"); false designation of origin, unfair competition, injury to reputation, and dilution and appropriation of property rights pursuant to the Lanham Act, 15 U.S.C. § 1125(a); and unfair competition pursuant to § 368-d of New York General Business Law. In this action, New Line seeks both monetary damages and equitable relief.

On July 26, 1988, Zomba, while not admitting liability, proposed to add a disclaimer sticker to the packaging of their compact disks, cassette, albums and singles containing "A Nightmare on My Street." New Line informed Zomba that it was not interested in working with Zomba to develop a disclaimer.

In the first week of August, New Line learned that Zomba had produced and was seeking to broadcast a rap music video of "A Nightmare on My Street." Unbeknownst to New Line, this video had been produced on July 25 and 26, even though the negotiations between New Line and Zomba had fallen through and even though Zomba was fully aware of New Line's agreement to produce an authorized rap video with the Fat Boys.

Believing that the unauthorized music video infringed its copyright and would create confusion, especially due to the impending release of Nightmare IV and the authorized Fat Boys video entitled "Are You Ready for Freddy?" ("Fat Boys video"), New Line on August 12, 1988 moved by order to show cause for a preliminary injunction and sought a temporary restraining order to enjoin the release and broadcast of the unauthorized video. On August 22, 1988, the Court granted a temporary restraining order which was to be followed by a decision on the motion within ten days.

The parties eventually came to a settlement: The music video was destroyed, and the duo added a disclaimer to the album.

DJ Jazzy Jeff and the Fresh Prince were given the option of doing two movies for the studio. If they chose to do the films, their salaries would come out of the settlement money, so they could theoretically get away without having to pay out of pocket over the lawsuit. Or they could choose to turn down both scripts and pay the original settlement fee. DJ Jazzy Jeff and the Fresh Prince planned on just turning down both scripts out of hand. The first script they were offered, as it turns out, was House Party.

DJ Jazzy Jeff and the Fresh Prince turned them down -- which is why Kid & Play ended up starring in the "House Party" franchise.
Posted by Mike at 9:26 AM