The Final Word on this 'Amazing Race' 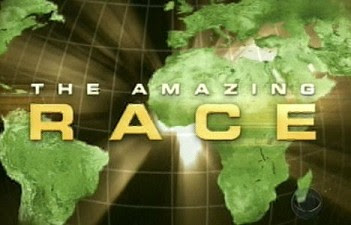 I know, it's been almost a week... but here's one last word on the fifth season of Franklin Avenue's patron reality show, The Amazing Race.

But the circus behind "Race’s" fifth season finale wound being up more thrilling than what actually appeared on screen – involving Dallas police, local TV news helicopters and a big, white Cadillac floating down the Trinity River.

The pandemonium began when "Race" exec producer Bertram Van Munster and then-CBS reality exec Ghen Maynard showed up to the finish line – at a remote Dallas park – in a big, white Cadillac. As cameras focused on Chip and Kim racing toward the finish line, the Cadillac’s brakes gave way – and the car flew into the nearby river.

Believing Van Munster and Maynard were still in the car, staffers panicked and called 911 – all while still trying to shoot the show.

"They didn’t know which one was the priority," Van Munster says. "Everyone thought we were in it."

As the Cadillac began floating down the river – and right behind the stage set up for the finish line – Van Munster’s and Maynard’s driver dove in and recovered some items. It also became apparent that no one had been in the car.

The cops then arrived (sirens can be detected on the show as Colin and Christie arrive), followed by the local news helicopters.

Worried that their secret was about to be blown, "Race" producers quickly rolled up the show’s logo – which had been plastered across the finish line – in case the choppers moved their cameras off the floating Cadillac and on to the "Race" finish line.

The newscopters eventually moved on – and it took three weeks, but the Cadillac was eventually pulled out of the river muck. And, much to Van Munster’s relief, the "Race" winners remained a secret – until last week.

In other race info, after talking to Van Munster I can confirm reports that the season finale left at least one challenge on the cutting room floor: A road block in Banff, Canada, in which teams had to build a teepee.

Van Munster said the challenge was stuck on the cutting room floor -- as was footage of a jaunt through Banff, where the contestants were put on a scavenger hunt to pick up their winter clothes from three different locations -- due to time restraints.