Death Knell for the Ambassador 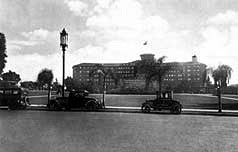 The clock is ticking on Wilshire Blvd., as the L.A. school board voted 4-3 to adopt Supt. Roy Romer's plan to demolish most of the legendary Ambassador Hotel.

Under the plan, which was one of five being considered by the board, the Los Angeles Unified School District would preserve the hotel's arcade of stores, a coffee shop designed by architect Paul Williams and the historic Cocoanut Grove nightclub while razing most of the hotel, including its lobby, hotel rooms and adjacent bungalows.

The board's decision ends one chapter in the life of the hotel that has played a significant role in the history of Los Angeles and represents one of the last pieces of open space along the densely packed Wilshire Corridor.

The school district has fought to gain control of the hotel site for almost 15 years as a way to ease overcrowding in neighboring schools.

At the meeting Tuesday, board members clashed over how to best deal with the historic aspects of the hotel while creating more classroom space. The three board members who opposed the superintendent's proposal were Mike Lansing, Jon Lauritzen and David Tokofsky.

Ken Bernstein, the director of preservation for the Los Angeles Conservancy, told board members that city residents "would surely never forget the demolition of the Ambassador." Nor, he added, would they forget "the elected officials who sent in the wrecking ball."

Conservancy officials said that the group's board will meet in the next few weeks to decide whether to take legal action against the district.