What Could Have Been (and Thankfully Wasn't): The Doomed Ambassador International Project 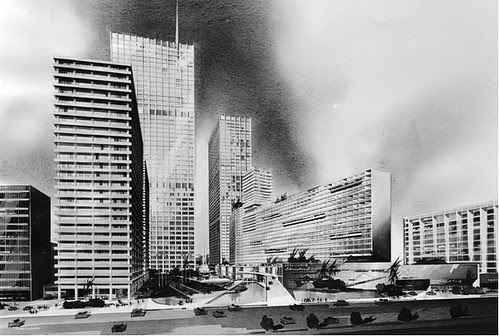 Talk about a fascinating find: Franklin Avenue reader Steven dug up these old drawings from 1957 of an ill-fated plan to completely re-develop the Ambassador Hotel site. (Above, a drawing of the proposed site. That's Wilshire Blvd. in front, and yes, the hotel here has been complete rebuilt and turned 90 degrees.)

Fifty years before bulldozers finally tore down the Ambassador for good, plans were already in the works to do the same thing, but replace it with a new, streamlined Ambassador Hotel surrounded by high-rises.

Yup, it looks like the Ambassador narrowly avoided its fate several times before disappearing last year. The so-called "Ambassador International" project, with its several high rises, also reminds one of Donald Trump's failed plans to build the world's tallest building there. 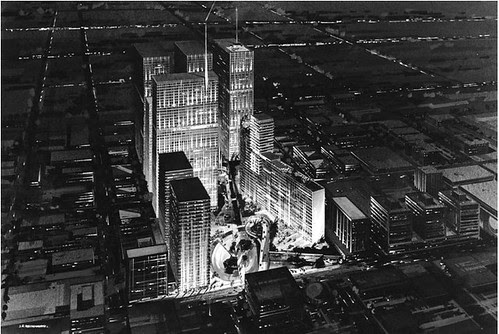 A night shot of the proposed development.

I've been following the dismantling of the Ambassador on your site with great sadness. I worked next door at what was then Tishman Plaza at 3440 Wilshire beginning in 1971. The monthly parking fee there was a bit too steep (when you're starting at $85 a week), but I found a lot just east of the Ambassador, off Catalina where 7th St. dead-ends at the grounds, where parking was only $8 a month. So, every morning, I crossed the grounds and went through the hotel lobby and the little arcade of shops, and out the main entrance to get to my office. That and the walk back through in the evening were my favorites parts of the day. That parking lot can still be seen (as can the intact hotel itself, bungalows and all) on Google Earth. I rather hope they never get around to updating those images.

Yes, I know; all terribly exciting. But my main purpose here is to share some renderings from 1957 of a project called Ambassador International, which, mercifully, never got off the ground. They serve to illustrate that the LAUSD project which ultimately led to its demise was not the first threat the Ambassador faced, and I thought you might find them interesting..

Beyond interesting, Steven, and thanks for sharing with us.

Now, here are the renderings of how the Ambassador International would have been built, in three phases: 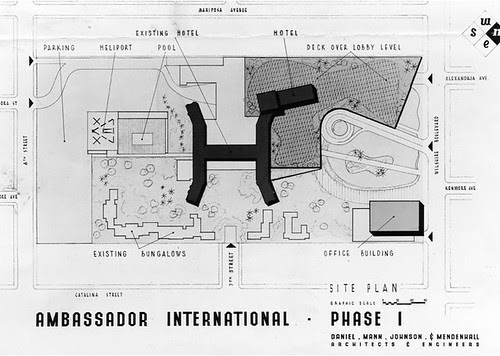 Phase one: A new hotel lobby is built, as well as a new chunk of hotel off the existing Ambassador's north wing. An office building replaces the northeast bungalows. 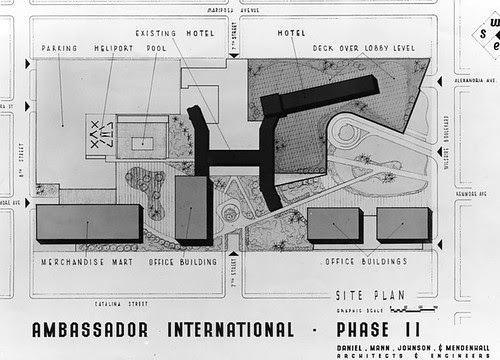 Phase two: More office buildings, including one that takes over a chunk of the south east wing. The new hotel arm off the old hotel's north wing gets larger. 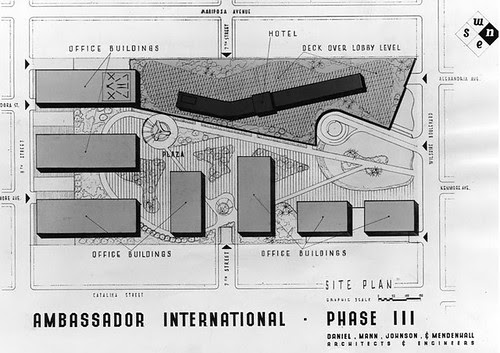 Phase three: Even more office buildings, while the old Ambassador is destroyed (and the new one completed).
Posted by Mike at 1:01 AM