We sometimes pass by the Old Los Angeles City Jail while driving home from downtown or Chinatown via surface streets -- but I never seem to have my camera when we do.

Until this Saturday, that is. I finally managed to snap a few shots of the old Lincoln Heights lockup -- but only one problem: The abandoned jail was doubling as a movie set, and portraying a New York's (I believe) "9th Precinct," as seen above. 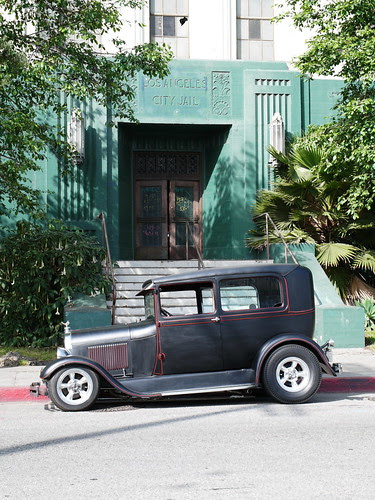 A shot of the production trailers lining the old jail this weekend:

Located at 401 N. Avenue 19 in Lincoln Heights, the jail was built in 1931 to house the era's convicts. At its height in the late 1950s, it housed as many as 2,800 prisoners. But its life as a jail was actually pretty short: The Lincoln Heights jail officially shut down soon after the Watts Riots in 1965.

The city still owns the jail, where events (such as ocassional haunted houses) still take place. It's also home to the Los Angeles Youth Athletic Club, the Bilingual Foundation for the Arts theater company, and the Aztlan Foundation.
Posted by Mike at 12:14 AM