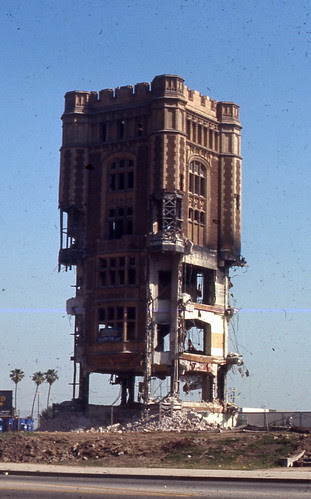 The 1971 Sylmar earthquake destroyed several L.A. structures, much as the city lost several classic buildings in the 1933 Long Beach quake.

Among those buildings condemned in 1971: The original Los Angeles High School. Here's a pic shot by Flickr user Snap Man on May 14, 1971, as the school is being demolished.

Unfortunately, L.A. High was replaced by a new, rather ugly structure that Snap Man describes as "prison-like." According to Wikipedia, L.A. High originally opened in 1873 at Temple and Broadway. In 1891, the school moved to a new location on Fort Moore Hill (on Hill St. between California -- now the 101 -- and Sunset Blvd. -- now Caesar E. Chavez Ave.). It moved one more time, to its present location in mid-Wilshire (on Olympic) in 1917.

Until recently, buildings commissioned to house the school were among the architectural jewels of the city, and always were strategically placed at the summit of a hill, the easier to be pointed to with pride. (One of the school's mottos is "Always a hill, always a tower, always a timepiece.")

The 1917 building sustained moderate cosmetic damage, principally in the tower area, during the 1971 Sylmar earthquake. Efforts spearheaded by the Alumni Association, founded in 1876, to repair and preserve the iconic structure were opposed by certain commercial interests, who lobbied for its demolition, and finally decisively thwarted when it was gutted by a fire of mysterious origin. The replacement structure has been universally decried and finds no champions among either current or former students and faculty, or residents of the neighboring community.

Here's a few more shots from the last days of the original Los Angeles High School, from Snap Man:

This is terrible. It does look like a prison presently. These kids are surrounded by this ugly school and are acting accordingly.

Nice blog!
Thanks for sharing all information about the Demolition of Los Angeles.