(UPDATED Monday morning with new links to more recaps and pics! If you've written something up or posted pics, let me know, and I'll add you to the roster!)

My legs are sore. Blisters are forming on a few toes. I could use more sleep.

Yet I can't wait for next year.

The Second Annual Great Los Angeles Walk took on Pico Boulevard on Saturday. More than 70 people joined me as we hiked nearly 16 miles, from the historic Coca Cola Bottling Plant (at the corner of Pico and Central) straight to the ocean in Santa Monica.

Not all 70 walked the entire way... but at least 40 did. (Others joined late, left early, or had some help along the way.) Great Los Angeles Walkers who made it from end-to-end got to experience, along the way, the bustling (even at 9 in the morning) fashion district; the Convention Center (currently home to the Auto Show); the Central American-dominated Byzantine-Latino Quarter; the city's shortest street (Powers Place); the beautiful old homes of Alvarado Terrace; a slice of Koreatown; the gut-busting food of spots like Oki-Dog and Roscoe's Chicken and Waffles; the sight of a massive crane that tipped over (smashing the roof of a yoga studio) in Mid-City; the closed (for the Sabbath) Jewish shops and restaurants west of Fairfax; the Fox lot; dodging golf balls next to the Rancho Park golf course; the cool ocean breeze once we hit Santa Monica; and much more. One group even stood by to help as a homeless man fell and required an ambulance.

Some pics of sights on Pico: 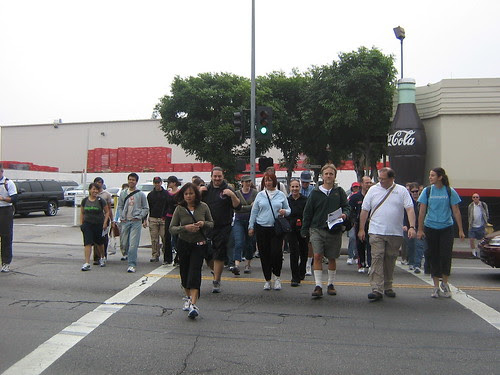 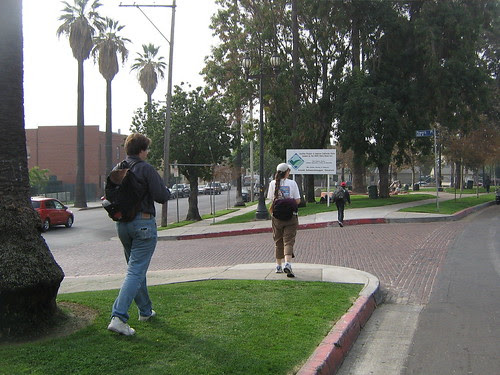 The shortest street in Los Angeles: Powers Place. Yes, that cobblestone stretch is the entire street. And yes, that's next year's Great Los Angeles Walk, which will take place from 9 a.m. to 9 a.m. 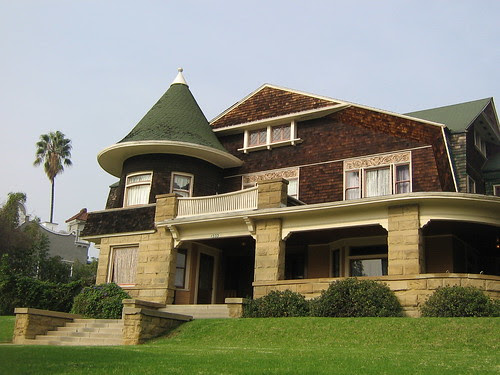 Beautiful homes on Alvarado Terrace -- at least the ones, like this, that weren't stuccoed at some point. 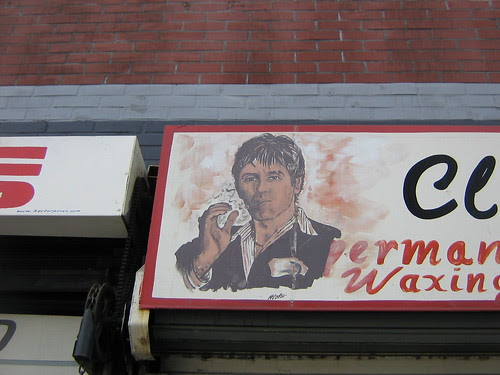 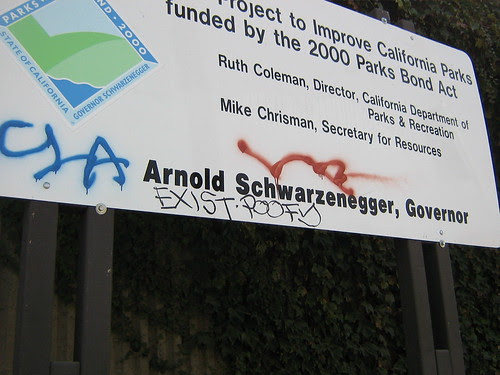 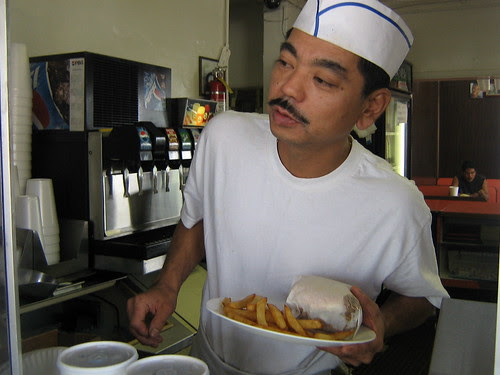 "Sorry, no physicians are currently on duty. Consume this pastrami burrito at your own risk." 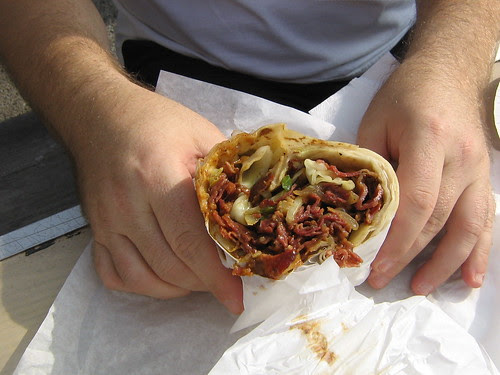 There it is -- the grease bomb known as Oki-Dog's pastrami burrito. 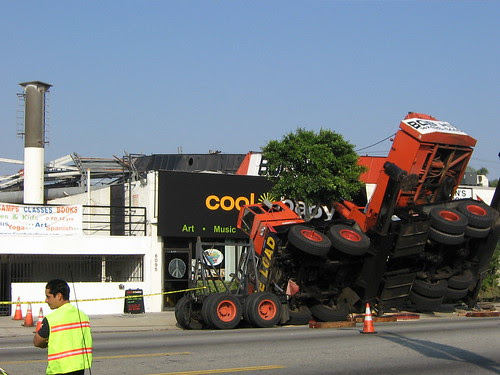 Oops. Pico was shut down between La Brea and Fairfax because of this mishap, but the cops still let us hike on the sidewalk. 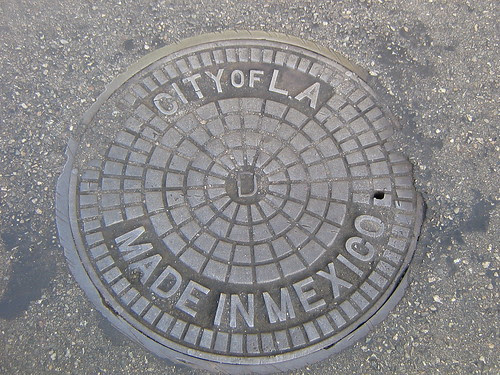 "City of Los Angeles -- Made in Mexico" 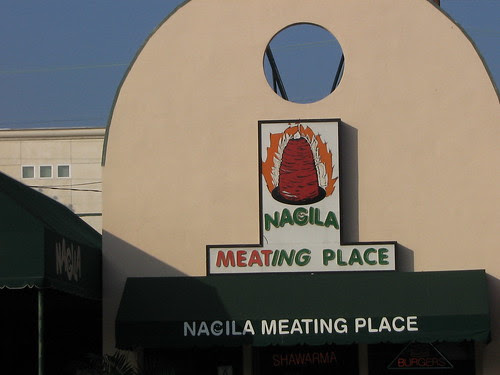 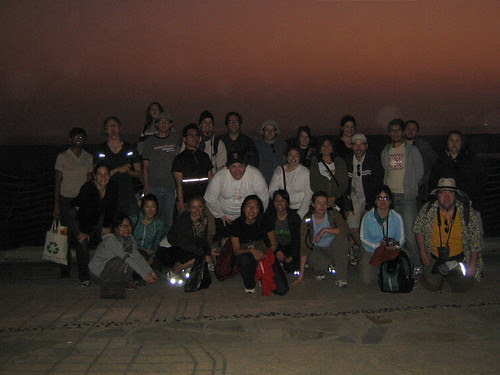 The walk began around 9:15 a.m.; we broke for lunch around noon and hit back up at 1:30 (although some had resumed by 1); and the first crowd made it to the end by 4:45, which the majority arriving by 5:10. Victory jerk chicken enchiladas (not to mention booze purchased on the way at the Santa Monica Trader Joe's) was consumed at Cha Cha Chicken, near the finish line.

I'll be posting walker accounts (and their photos) as they hit online. An early list of recaps: 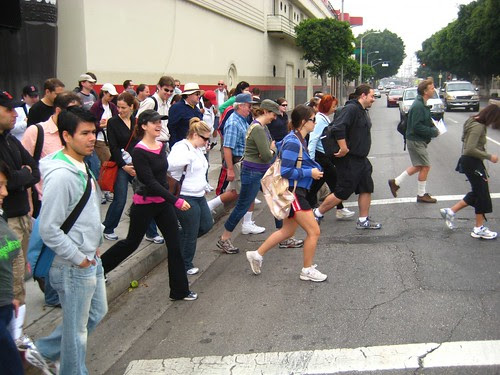 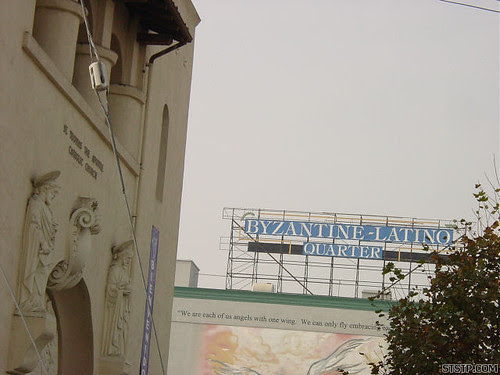 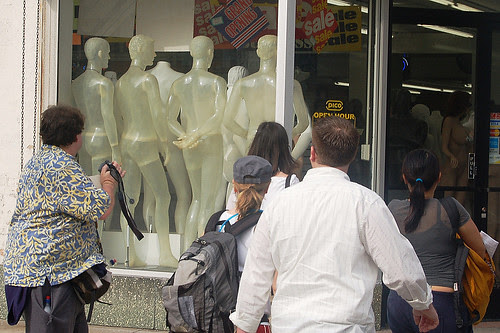 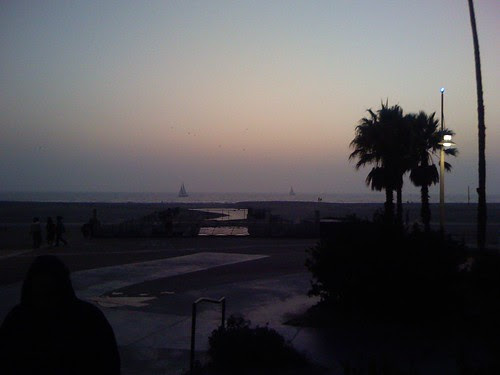 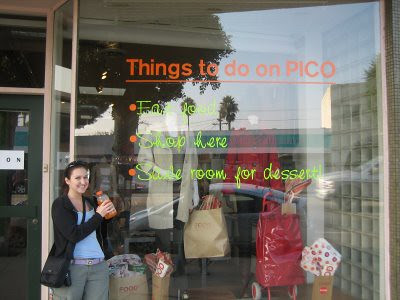 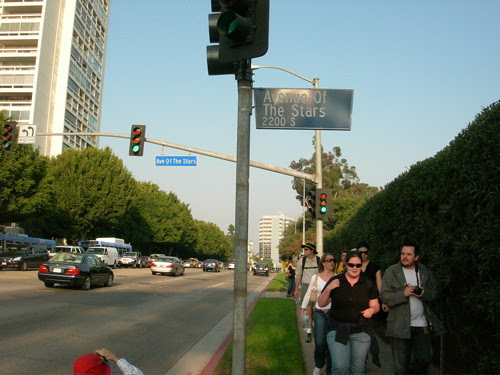 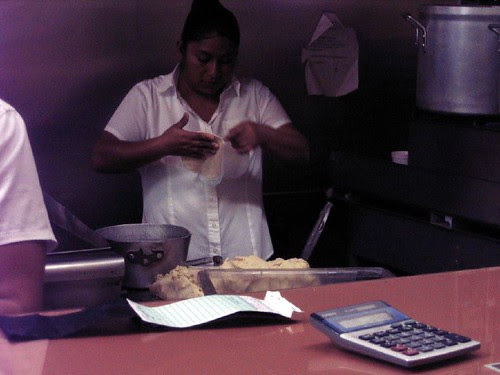 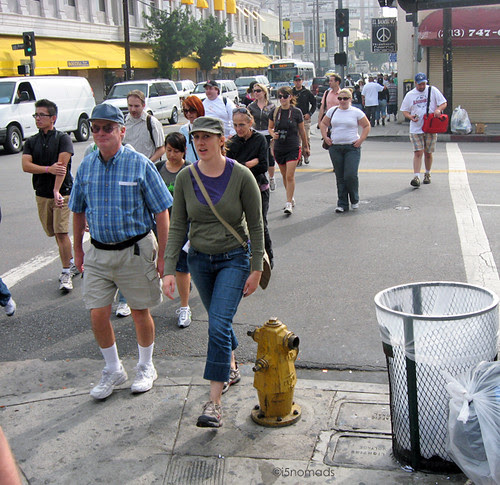 And finally, another round-up, by walker Margaret Cherry:

Just to let you know that I am still in the land of the living after walking 15.6 miles yesterday along Pico.

It was a great experience. So many things happened to us Urban Explorers, aka the PPC (Pico Pedestrian Corps). Just made that up. That was our number one question--Who are you walking for? Our answer was because it's there!

My day started early in Long Beach as I drove to the Wardlow Blue Line Station. As maintenance was scheduled all weekend we were efficiently bussed from Compton to Imperial. I got off at San Pedro Station and walked .7 miles to the start, to meet up with Mike and the walking group.

After we left the landmark Coca-Cola plant at Pico/Central, past the People's Sausage Company, we breezed thru the Fashion District/Convention Center area into Latin America. Great place to buy a cheap air ticket to Guatemala or a two fresh Mexican buns for 85 cents.

Took a short detour to Alvarado Terrace with the shortest street in LA and the magnificent houses --a setting in the book Paint it Black by Janet Finch.

Onto the Byzantine-Latino Quarter that houses the Greek Orthodox church, an outstanding Christmas Eve experience. My only regret---we were too early for lunch at Papa Christos, Greek restaurant a favorite of Huell Howser.

Most of the walkers ate at Roscoe's but our group took over the petite Skye's Gourmet Tacos, 5408 Pico, where for less than five dollars you can get great grub, sit outside and interface with other foodies.

Onto the midcity, roped off as a crane had overturned on Cool Baby. Heard on the evening news that the crane was hauled in to put up the LED sign that would have stared at the Oprah billboard. Doesn't anyone use ladders these days?

Some young kid from his second story window threw a raw egg at us. Thank goodness he was a bad shot! We helped an old man with his walker (the stationery kind) and strolled through the area in the vicinity of the Museum of Tolerance. Nothing open, of course, it was the Sabbath. So much for Beverly Wood. Just another Day in the Life on Pico.

A pottie stop for my companion, David, at the Westside Pavilion gave me my second wind. A beautiful young woman with the face of an angel operating the Green Tea Co. kiosk/cart gave me a free liter of ice cold green tea for energy. It worked.

Had no problem at all with the hills as we sped along past Century City reaching Centinela, which is the border of the People's Republic of Santa Monica. The streets seemed to start at 32 then it was 23 and next 6, we breezed past Santa Monica college expressing our affection for KCRW. The queue at Trader Joe's took more time!

But there I was at the corner of Lincoln and Pico where my daughter works at Chrysalis. A photo op for sure as it takes her sometimes 90 minutes on the freeway. My carbon footprint was zilch!

Arrived at ChaCha Chicken just as the sun was setting, with no appetite at all. (Hey, maybe I have discovered something.) My thighs hurt as did everyone else's. I won't even detail my foot aliments. Next time I am going for the wider walking shoes and the extra pair of sox as well as an emergency stash of band aids. George and Connie poured me a glass of wine which perked up my appetite and I dived into the spinach quesadilla, jerk style.

It was a great day. I loved all my fellow walkers. The IPOD walking playlist hooked up to the speakers in the backpack was a great motivator, even earlier in the day in the fortified McDonald's rest room! (Some things you just have to see... You know the address! Somewhere on Pico.)

Of course, we really should be walking again next week, now that we are in condition for it.

Yeah, not so sure I'm ready to do it next week, but I may just join other walks being planned for the future. And don't forget to clear the Saturday before Thanksgiving next year, for the third Great Los Angeles Walk!

One more note: I'm still figuring out why the Great LA Walk T-shirts aren't appearing on Cafe Press. I'll let you know when that issue is resolved.