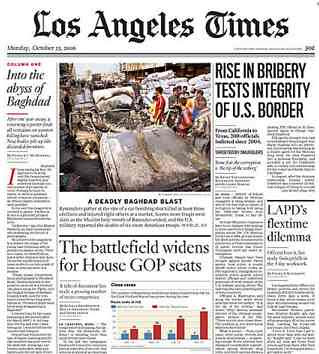 Lost in all the hand-wringing over the Los Angeles Times' elimination of the California section -- a sure sign as any that the paper is waving the white flag, and giving up any hope of being the powerful, comprehensive newspaper it always aspired to be -- was its announcement that the stand-alone Classified section would be cut as well.

Think about it -- that's as telling a sign as any that the newspaper biz is dying. Once a hefty source of income, classified sections across the country have been decimated by the Internet (particularly Craigslist). The L.A. Times is moving the classifieds into the Sports section, which means your seven-section paper (Front, California, Business, Sports, Calendar, Classifieds, and the rotating daily feature) has been reduced to five.

Thought your paper was already thin? Let's face it, the L.A. Times has now turned itself into a medium-sized market newspaper. Los Angeles, you're now getting Boise-sized news. When I lived in Honolulu, our paper of choice, the Star-Bulletin, also consisted of just four sections -- news, business, sports and features. But places like Honolulu or Boise are just a fraction of L.A.'s size... and don't we deserve a newspaper befitting of the nation's second-largest metropolitan area?

The paper's also thinner these days as fewer and fewer circulars are stuffed inside; that, along with the decline in Classified ads, is the real problem. Every time another major retailer folds, I'm reminded that it represents yet another ad supplement that will no longer be found in the Sunday paper. Just recently, that's included Linens N Things, Mervyn's and Circuit City. Go back just a bit further, and retailers like CompUSA and Robinsons-May were loyal advertisers as well. Now, all gone. Oh, and take out all of those real estate ads as well -- and fewer auto ads on top of it.

Is it any wonder the paper's so thin?

Now, I'm depressed and angered that the Los Angeles Times is axing its California section; I think it's short-sighted and will cause more harm than good. Moving Business inside the front or California sections, while putting all of the Hollywood business news inside Calendar, makes more sense. (Most business news -- bailouts, financial collapses -- are national news anyway, and could fit in the front section.)

But I'm not going to race and cancel my subscription just yet. If the goal is to convince Tribune to rebuild the L.A. Times, hitting them even harder on the subscription side sure isn't going to help things. And more importantly, we still all have a vested interest in the health and survival of our own major newspaper. If we don't subscribe, then we have no voice in the matter. And although they've pissed me off by cutting California, I'm not ready to enact that ultimate punishment. Yet.

MEANWHILE, a bit of advice to the Times. After years of soft, cheesy and downright uninspiring marketing campaigns (one spot featured a series of goofy-looking folks ogling the newspaper through a newsbox -- see it here), now is not the time to be subtle. The paper needs to start scaring the public -- and particularly its remaining subscribers -- by pointing out what would happen if the paper weren't around. How about this for starters: The Los Angeles Times. Without Us, A Known Rapist Would Still Be Working At County-USC Medical Center. Yep, You'll Miss Us When We're Gone.
Posted by Mike at 12:29 AM

Anonymous said...
This comment has been removed by a blog administrator.
2:53 PM