On Oct. 10, 1999, an extra-thick edition of the Los Angeles Times Magazine landed with a big thud on subscribers' front lawns. But the secret behind the issue -- which touted the opening of the brand-new Staples Center -- would hit the L.A. Times newsroom with an even bigger thud a few weeks later.

To refresh your memory: The L.A. Times devoted that entire issue to the Staples Center, which was unusual to begin with. But then, the Staples Center wound up selling ads for the magazine, along with the LAT ad team, and both sides agreed to split the profits. That led to anger within the newsroom, as the idea that the subject of the magazine's stories would actually benefit financially from their publication remains a big journalism no-no.

Legendary former publisher Otis Chandler wrote a letter of support to the L.A. Times editorial team, and the late David Shaw was tapped to put together an exhaustive investigation into what went wrong. Publisher Kathryn Downing and Times Mirror CEO Mark Willes wound up apologizing for the dust-up. (Both had been criticized for a lack of understanding when it came to the editorial side of the newspaper business.)

In the wake of the uproar, Willes, Downing and editor Michael Parks all eventually departed.

In this age of shrinking newsrooms, dying publications and desperate attempts to save the print business by any means necessary, the handwringing over that issue almost seems quaint. But it was an early sign that things were about to change forever for both the Los Angeles Times -- starting with the 2000 acquisition of Times-Mirror by Tribune -- and the newspaper business as a whole.

Some might argue that the L.A. Times never recovered from the Staples Center/magazine mess, and it did seem to herald an age of disappointments for the newspaper. (Of course, to be fair, this has been an age of disappointments for just about every newspaper.) As print has struggled in the wake of new technologies, the once-mighty (and hugely profitable) Times has seen its circulation drop, its staff shrank, its multiple editions and bureaus were shut down and its size was reduced.

As for the L.A. Times Magazine, the once-weekly publication disappeared all together, before returning last year as a monthly -- but produced by the paper's advertising staff (an irony, in light of the Staples Center mess, pointed out by many).

Now, in what's probably coincidental timing, the L.A. Times Magazine is moving back to the paper's editorial umbrella. The LAT announced on Monday that Nancie Claire would replace Annie Gilbar as editor of the publication -- and that it would once again report to editor Russ Stanton.

So what was in that infamous 1999 issue of the Los Angeles Times magazine? Thanks to the Wayback Machine, here's a snapshot: 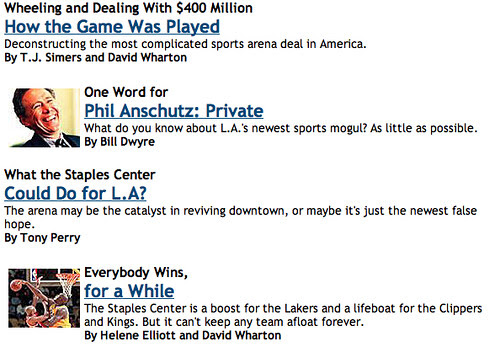