It was another rough year for farewells in Los Angeles, where frequently there's truth to that old cliche that nothing here is ever permanent. 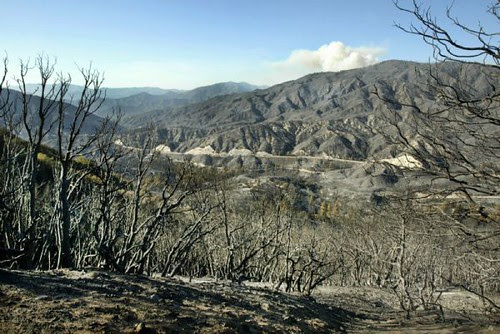 (Pic by the San Gabriel Valley Tribune.)
1. Much of the Angeles National Forest, sadly, to the massive Station Fire. The fire burned 160577 acres (251 square miles) and killed two firefighters. Ash from the mountains continues to rain down on Angelenos, and it will be decades before the forest starts to recover. 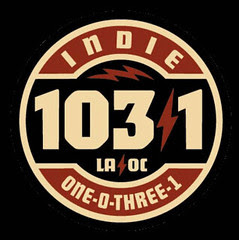 2. Indie 103.1 (KDLD/KDLE) and 97.1 FM Talk (KLSX) both disappeared in 2009, the victim of a weak radio economy and the rise of personal people meters -- Arbitron's new way of measuring radio listenership. Indie was never a big ratings grabber, while KLSX's replacement, KAMP "Amp Radio," has turned into a strong performer for owner CBS Radio. 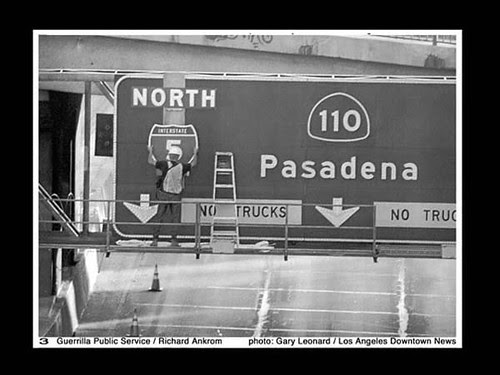 (Pic by Gary Leonard.)
3. Richard Ankrom's guerilla 110 Freeway sign art installation disappeared after Caltrans replaced its signs on the 110 North. Ankrom attempted to find the signs he made and secretly installed -- but discovered that they'd already been crushed for scrap metal. 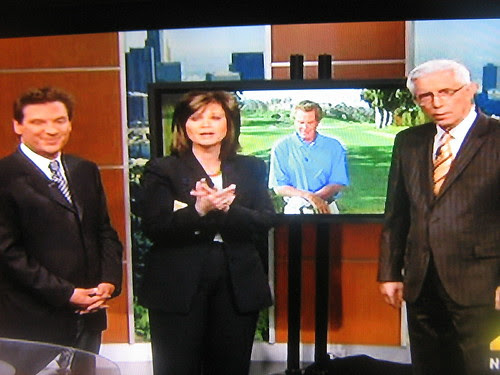 4. KNBC's Paul Moyer (above, when he decided to give his on-air farewell from the golf course, rather than show up to say goodbye in the Channel 4 studios) retired due to budget cuts, while former KTTV anchor John Beard, fed up with L.A. news operations, headed to his old stomping grounds in Buffalo, N.Y. Also, Rick Dees gave up his attempt at an L.A. radio comeback, as "Movin' 93.9" flipped to a Spanish format. 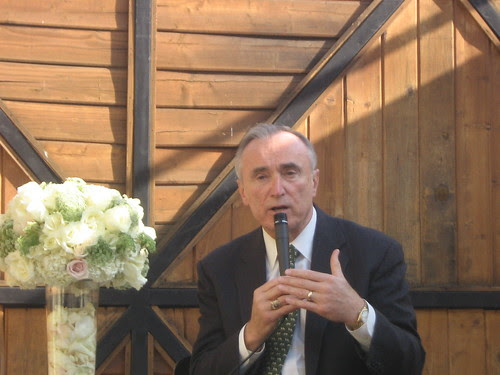 5. Former Police Chief William Bratton made major strides in decreasing crime and turning the Los Angeles Police Department around. And although the chief would be the first to tell you that (modesty isn't his strong suit), much of that conventional wisdom is true -- crime is down in the city of Los Angeles, while the LAPD's image has been greatly improved. Bratton stepped down in late fall, replaced by Charlie Beck.

6. A preservation group managed to "Save the Derby" -- at least, the Los Feliz building (the last surviving one-time Brown Derby restaurant) where the Derby nightclub was housed. But The Derby itself -- the club known best for its cameo in the movie "Swingers" and as ground zero for the 1990s swing dance revival --shut down in early 2009. Other clubs closing in 2009 included the Knitting Factory and the Key Club.

7. Chili My Soul, the Encino eatery known for its adventurous chili selections (my fave was the Habanero/Mango Chicken), shut down in late summer after the death of owner Randy Hoffman. Other eateries closing in 2009 included Fritelli's Doughnuts and Twin Palms; also shut down were popular book store Cook's Library, as well as Little Tokyo grocer Mitsuwa Marketplace. 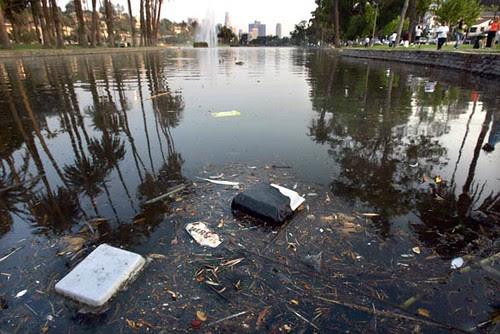 8. The first big event I ever took Evan to, the Echo Park Lotus Festival, didn't take place this year -- a victim of budget cuts, and even sadder, the death of the once-vibrant lotus blooms in Echo Park. Also nowhere to be found this year: Another favorite event, Little Tokyo's Tofu Festival. 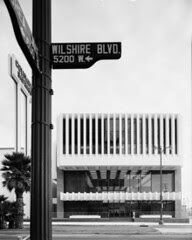 9. A year after the Lou Ehlers Cadillac showroom was torn down, a similar fate was in the cards just down Wilshire for the mid-century Columbia Savings Bank building. Demolition has already begun on the 1965 Miracle Mile building, which the L.A. Conservancy notes is "an important example of postwar bank design as well as the innovative integration of art and architecture." The building had most recently served as a Korean church.

10. Army Archerd passed away in September at the age of 87. Army spent more than 50 years at Variety (where I saw him on a nearly daily basis for 10 years), spanning several generations of Hollywood. A lot of us cover Hollywood -- but none of us will ever have the career that Army had at Variety. The stars changed, the pictures changed, the whole industry evolved -- yet there, until nearly the end, was Army, chronicling it all daily in his "Just for Variety" column.