Back in the before times, when there were in-person Emmy events every night, sometimes you’d get a heavyweight to show up and either promote their own project, or support another one. Remember when Bruce Springsteen actually performed at his Netflix FYC event for “Springsteen on Broadway”? Everyone’s thirsty!

What they’ll be talking about this year is Elton John and David Furnish, showing up at Saturday night’s FX/20th Television FYC event for “Pose.” Sitting on stage in front of a sea of cars honking their horns and flashing their headlights in delight, John and Furnish sat down next to “Pose” co-creator Steven Canals, as well as stars Billy Porter and Mj Rodriguez, and answered questions from executive producer Ryan Murphy. Scott Huver covered it for Variety:

Murphy unspooled an anecdote from his childhood that he’d long wanted to share with John, recalling being a gay 7-year-old with a traditional, hetero-masculine father he’d never quite connected to – until one day while riding with his father in the car, John’s 1975 hit “Philadelphia Freedom” came on the radio.

“I was like, ‘You know what, I’m just going to be me,’ and I performed the shit out of ‘Philadelphia Freedom’ in the back seat of that car, and my father saw me for the first time, thanks to Elton John,” Murphy recalled. ‘We pulled into my driveway and he looked at me and he goes, ‘You have a good voice,’ and it was the first time he had ever said anything kind to me. So you’re so a part of my life, Elton, in a way that you’ll never know.”

Apparently John and Furnish were scheduled to end their Los Angeles vacation before Saturday’s event, but extended it in order to attend the FYC event for “Pose.” They weren’t paid to be there, but rather, simply offered to show up because they are fans.

John and Furnish had reached out to Murphy and offered to support the show in any way they could after falling in love with “Pose,” which they lauded for its depiction of the fight for LGBTQ rights in the 1980s, and even more critical, the push for AIDS/HIV awareness and research back then. Writes Huver: 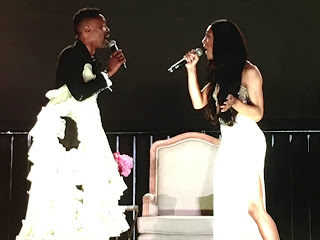 The event ended with a stirring performance by Porter, and duet by Porter and Rodriguez. Especially impressive when you realize they were singing on a stage to a bunch of people in cars (all listening to their car radios) and not quite seeing any reaction or even really hearing themselves!
Posted by Michael Schneider at 1:27 PM