The Return to the Panel Stage, For the First Time in More Than a Year, Via 'Mythic Quest' 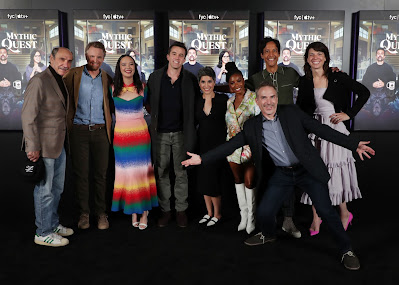 While TV Academy rules so far have limited FYC events to either online or via drive-in events, there’s no rule against throwing other gatherings that don’t include RSVPs through the official Academy membership list.

I know of one because, yes, I agreed to moderate it. On Monday I was live, on stage, in person at the Ford Amphitheater (outdoor, natch) with the cast and producers of Apple TV Plus’ “Mythic Quest”: Rob McElhenney, Ashly Burch, David Hornsby, Megan Ganz, Charlotte Nicdao, Danny Pudi, Imani Hakim and F. Murray Abraham.

On Saturday morning, someone came to my house to swab my nose, a COVID test to make sure I’m clean and ready to host Monday’s panel. (News flash: The test came back negative!) Listen, F. Murray Abraham is a national treasure, and I’m not about to hurt that, so I was more than happy to do the test. (As I’ve mentioned before, I’ve been vaxxed with the sweet one-dose J&J for months now, so all good.) Now, I have to admit, I was excited to actually moderate a panel in the flesh with other people, and not just inside Zoom boxes. It’s one of the reasons I quickly said yes — along with the fact that I’m a “Mythic Quest” fan.

And I'm so glad I did it, as it was a blast. Seeing people in person, rather in those Zoom boxes, and having an audience laugh and listen as we talk about Season 2 of "Mythic Quest"... it was great. But also surreal that after more than a year, we got so quick back into the old habits of shaking hands. Have we learned nothing?

Also, another shout out to F. Murray Abraham -- Maria and I told him that Nathan is a fan of his character, C.W. Longbottom, and he volunteered to record a message for him!

Posted by Michael Schneider at 9:00 AM